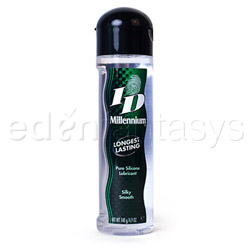 I give this lubricant three stars, only because it is great for water play and it has a slick, natural feel. However, it dries up quickly and does not play well with silicone toys, of which I am a big fan. Overall I was disappointed with this lube.
Pros:
Great for play in water, natural and unobtrusive feel, relatively easy clean up.
Cons:
Not compatible with many silicone toys, dries up quickly, expensive.
Rating by reviewer:
3
extremely useful review
Unless you're dating Aquaman, I will have to join other reviewers in saying this lube is a bit of a pricey disappointment.

ID Millennium is a lubricant with a silicone base and is the only silicone lube made by ID. It cleans up with a little soap and warm water in much the same way as a water-base, but you may also want to use some kind of wipe for an easier time. The silicone base does make it indispensable for those engaged in aquatic coitus of all shapes and forms, but for non-nautical adventurers it's buyer be ware. ID Millennium is the first silicone-base that I've used, and I approached it with high expectations. I was greatly disappointed. If you peeled the label off this one and stuck it in a line-up full of water-bases, I'd scarcely be able to pick it from the crowd. In terms of texture it's not a stand-out, although it does manage to mimic my own natural secretions fairly well. This is something I tend to look for when I make this kind of purchase, so I was impressed on this count. However, this is really the only thing I can say it has going for it besides its shower-compatibility.

Finally, if you are like me and prefer silicone toys, this lube is an expensive waste of time. Silicone on silicone does not HAVE to equal a messy bonding scenario. However, as I understand it, when a weaker grade of silicone comes in contact with a stronger grade, bonding can and will occur. For this reason it is always a good idea to a test on a small area on your silicone toy (the base if it's a dildo). I tested this on the base of a Tantus and a Vixen toy and there was bonding on each. I basically found this lubricant pretty useless for me. I would likely only use it during vaginal intercourse, and even then, there are other lubricants that I would far prefer to this one.
Follow-up commentary   I've started to like it more 3 months after original review
I've begun to use this lubricant for handjobs and vaginal penetration with my boyfriend and have started to like it slightly more. I don't think I would change its rating, or I could maybe I'd change it to a 3.5 stars instead of just 3. I do still find that it dries up too quickly and I wouldn't use it again for anal, but for a stroke or a quick poke with nothing too big it's not so bad and makes for easy clean up. I'm glad I could find a use for the stuff because it costs enough!
This content is the opinion of the submitting contributor and is not endorsed by EdenFantasys.com