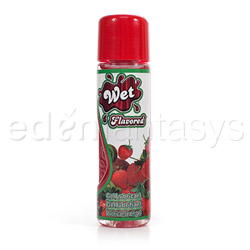 This lube is great i loved it. My boyfriend and I loved it. This is the only lube that we buy and use!
Pros:
tastes great!
Cons:
it got a little to sticky
Rating by reviewer:
5
somewhat useful review
Well this lube worked as planned. It also tasted good that's very rare for a lube to taste as good as its supposed to. Although it did get a bit sticky toward the end. another good thing was that its latex friendly. Thank God! and it works great with toys too! I really like the strawberry flavor. I didn't think that it was going to taste as good as it did. So it made oral a lot better on my part at least.

To take it off was a lot easier than most, this one you just have to clean off with a wet cloth or just bathe it off. Another plus about this lube is that it does what it says and it taste great. This is the only lube that my boyfriend and I use. It even puts KY lube to shame! I would recommend this product to anyone, that wants a good tasting lube. The smell is fabulous too!

and a little goes a long way to so you don't have to use as much as the other kinds.The only thing that I really didn't like about it was that it got sticky but that didn't matter at the moment.

It works good on toys like I have mentioned before and you don't have to put a lot of it on them just a little drip on the top and your good for the whole night. It works great with condoms too, it makes it more pleasurable with this lube. Another good thing is that since you don't have to use as much lube it goes a long way and you don't have to use as much so there isn't such a big mess at the end. It might get a little sticky but it doesn't get messy like other lubes.
This content is the opinion of the submitting contributor and is not endorsed by EdenFantasys.com