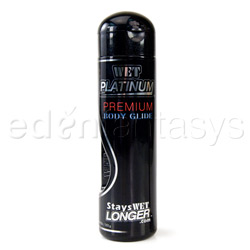 Aside from the occasional need to reapply and that it could be a tad bit more slippery, this is one of the best lubes I’ve used. It feels like the real thing, is waterproof, and lasts a decent while.
Pros:
Slippery like the real thing; waterproof; tasteless; odorless; long-lasting.
Cons:
Need to reapply occasionally; could be more slippery; need to use a lot if in water.
Rating by reviewer:
4
useful review
All the lubes I’ve tried before have been water-based|Water based lubricants, so I was really excited when I received my Wet Platinum Bodyglide|Wet platinum bodyglide lubricant.  I’ve heard great things about silicone-based lubes|Silicone based lubricants and was ready to put this one to the test.

Since my husband wasn’t home when the package arrived, I thought I’d give the lube a test myself.  I poured a little into my hands and rubbed them together to see how it felt.  It made my hands nice and slippery, and it had no noticeable smell--good or bad.  Next, I put my hands under running water and rubbed them together to see if the lube came off, and it didn’t!  It stayed just as slick as it had been before.

When my husband got home, I told him our new lube had arrived.  He was more than willing to have some fun after work. Once we’d fooled around for a while, I poured some lube into my hand and slowly started to jerk him off.  He was moaning almost immediately with how slick and smooth this lube is.  It is also pretty runny, so it’s a little messy, but feels great.  After a few minutes, I had to apply more to keep things moving smoothly, but this didn’t happen as quickly as with our water-based lubes|Main Types of Sex Lubricants.

Once he’d had enough hand and wanted the real thing, I tried to wipe the lube off my hand with some tissue, but it didn’t all come off.  This isn’t much of a problem because the residue left is silky, kind of like after you put on lotion.

One thing I was worried about with the wet platinum|Wet platinum bodyglide review is how it would feel inside me.  I have a fairly sensitive vagina and a few lubes I’ve used in the past have burned or been uncomfortable.  The bodyglide didn’t bother me at all and was very smooth and like the real thing.  It made for a great, slippery time.  I can’t say if it stains sheets because, thankfully, I didn’t get any on mine. Also, it has no taste but feels a little funny in your mouth.

The last thing I needed to do was try this lube on my husband in the shower.  I gave him a hand job with the shower spraying on us.  I wanted the platinum lube|Wet platinum bodyglide review to stand up to the constant spray, but it didn’t as well as I’d hoped.  I had to use a lot and had to reapply several times.  One very important tip for playing with the  lube in the shower:  be careful!  If you get any on the floor, it and the water make for one slippery surface that’s really hard to stand on.  We were sliding around for the rest of our shower.

Aside from the occasional need to reapply and that it could be a tad bit more slippery, this is one of the best lubes I’ve used. It feels like the real thing, is waterproof, and lasts a decent while.
This product was provided free of charge to the reviewer. This review is in compliance with the FTC guidelines.