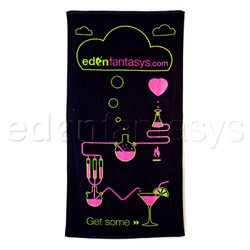 Life's a Beach with Eden Fantasys!

I am not sure I would pay 14.99 for this towel, as I have purchased higher quality ones at Target or Walmart for less. However, I love the design and love to support Eden Fantatsys when I can...too bad I'm not near the beach to show it off! If the towel were a bit thicker, I would have given it 5 stars.
Pros:
Ample Size. Cute Design.
Cons:
A Bit Thin.
Rating by reviewer:
4
useful review
I added the Eden Fantasys Towel to my last order I placed, as part of the 10 year anniversary celebration. I am so glad that I did! When I first saw the towel, I was immediately drawn to the graphics, which feature the Eden Fantasys logo and website address as well as a martini glass/heart in a cool science experiment design. I love the contrast in colors, mainly black, lime green and pink. The design does not scream "sex toy store" and the only way someone would know where it was purchased is by looking up the address. If the towel is used for sunning on the beach, the logo will most likely be hidden when laying on the towel.

The towel measures 59" in length and 29.5" in width, which is a good size for bath or beach. It is made of 100@ cotton, with the design printed onto the towel. The only drawback I had with it was the thickness of the material. I received my towel as a free gift, so I am very grateful for it. However, if I had spent 14.99 on it, I would have wanted a little more substance to it. There are certainly worse options on the market, however, so don't feel leery to add it to your cart!

I have not washed this towel yet, as I am using this one as a sort of table cloth for the tray where I keep my tote full of toys. I ordered a second one with the order I just placed and that one will be used as an actual towel. I can tell the fabric as some sizing in it, which makes it a bit stiff, so after a washing ro two, I would expect it to become softer, more so as it gets used.

This towel is a must if you are an Eden Fan...how could you resist?
Experience
As stated above, I am using my first towel to protect the tray on which I keep my toy tote. I would also consider using it to shield the mattress during play to protect it from my squirting. I cannot speak to to absorbancy in this matter, as I have not tried it. I have a feeling the towel is more absorbent after washing than before.
Follow-up commentary   I still like it 3 months after original review
I use my towel to cover the side table where I keep my toys. It is soft, plush and keeps the surface protected. I think the design is too cute to use and possibly fade in the wash. I love how the color combination brightens up the bedroom.
This content is the opinion of the submitting contributor and is not endorsed by EdenFantasys.com

Reviewed by SkylarrStarr (Eden Writer) "And the day came when the risk to remain closed tighly in a bud became greater than the risk it took to blossom." Anais Nin
Rank
5.9
wrote 51 reviews
Comments
Make a post
Forum
Thank you for viewing EdenFantasys beach towel – gags review page!
Top