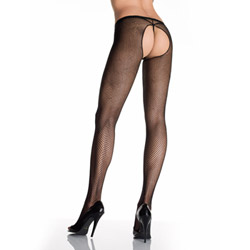 These crotchless fishnets were our secret!

I consider these to be some of the more comfortable fishnets that I've worn in my time, including in the waist, thighs and throughout the legs. I did get a couple of snags but I'm hoping that they hold up for at least a couple of more wears. I think that if you can wear them even twice though, then you are getting a great deal since they only cost $3.99.
Pros:
Though one size, they do fit a large. The waist is fairly comfortable. They can be worn for hours.
Cons:
They did snag a bit and I'm thinking that will continue when I wear them in the future.
Rating by reviewer:
4
extremely useful review
I think that for a woman I have some sort of pantyhose fetish, particularly for fishnets. I just feel that they make any outfit look sexier. Or no outfit at all, for that matter. Not long ago EF was having a promotion in which you could choose a free pair of hose when buying lingerie. These automatically caught my eye.

I'd never had any crotchless tights before but these just screamed me. When I first opened them up I wasn't sure that they would fit. They looked very small. They are a "one size fits most". Leg Avenue recommends them for those weighing from 90-160lbs. I am a size 10/12 or large and on the higher end of those weights. I did not have a chance to measure these prior to wear and I don't think that measuring them after I've worn and then washed them would give you an accurate idea of the sizing.

Despite my worries they stretched out smoothly to fit me well. I do not have a well defined waist so that is often an issue for me when I wear hose. Sometimes I cut the waistband of a pair to make them more wearable. However, I didn't have to do that with these, which I was majorly happy about. They did create a small amount of spillage where they hit me around my waist but I would say I still looked good and it was only somewhat noticeable because I was wearing a dress that was form fitting. I also have larger than average thighs and these fit over them quite well.

These hose came packed on a regular piece of cardboard packaging with a plastic covering as you see many tights sold at the store in.

These hose are 100% nylon. The cleaning instructions for these are hand wash in warm water, drip dry, only use non-chlorine bleach, and do not iron. I don't always follow instructions. I actually washed these in my washing machine in warm water and then laid them out to dry. They didn't get damaged in the wash but I'm not recommending this move, just letting you know that it's been done.
Experience 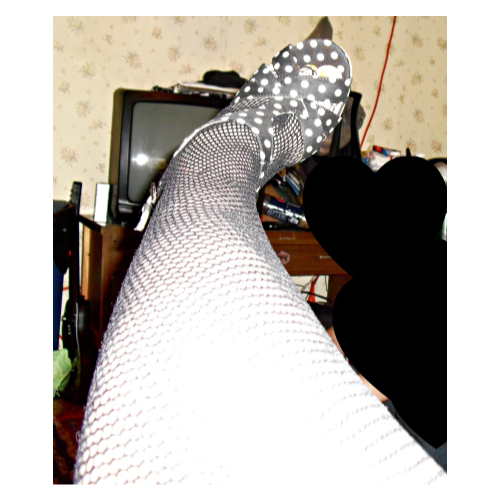 I wore these with a pin up style dress for a monthly anniversary with my boyfriend. I showed them to him before he left and kept mentioning them while we were out all day to try to keep him in a frisky mind set. I also bent over often and asked if you could see anything but he said no since my dress was long enough to cover me. I was actually a bit disappointed. I may be an exhibitionist after all.

I wore socks and boots over these fishnets. We did a lot of shopping that day. During that time we walked from a few buildings back and forth. I would say that I walked at least 2 to 3 miles in these hose. When our day of shopping, etc. was done and I came back home I noticed a small snag on each leg. However the snag was in a spot that my faux leather boots had been rubbing all day, so I blame the boots. At that time I was hot and tired so we did not have sex while I was wearing these. I mainly just wanted to put on some comfy lounge clothes. Prior to that I did try them on with my new heels though (pictured above) so I could marvel at the pairing.

I do plan on wearing them for foreplay and possibly sex in the future, though.
Follow-up commentary   I still like it 5 months after original review
I have washed these in the washing machine at least a handful of times by now and they still only have minimal pilling, which is unusual for any fishnets in my opinion. I never did get around to having sex in them, which I suppose, is ironic.
This content is the opinion of the submitting contributor and is not endorsed by EdenFantasys.com

Reviewed by Sera26 (Eden Writer) "In a word: pleasure."
Rank
5.8
wrote 61 reviews
This review was edited by
Comments
Make a post
Forum
No discussions yet.
Thank you for viewing Crotchless fishnet pantyhose – hosiery review page!
Top