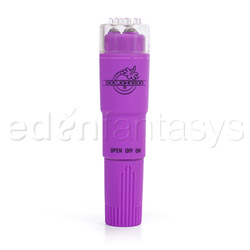 A Pocketful of Melted Candy

Doc Johnson has for some reason taken their fantastic staple of the sex toy world and made it just slightly worse. It still works well enough, but it's a little bit weaker, a little bit louder, and for some reason sticky like melted hard candy. Go with one of the three other nearly identical Pocket Rockets from the same manufacturer, and you'll be happier.
Pros:
Cheap and effective.
Cons:
Sticky texture, weaker than original Pocket Rocket, louder than original Pocket Rocket.
Rating by reviewer:
3
extremely useful review

This one, however, while it's a pocket rocket made by Doc Johnson, is not The Pocket Rocket by Doc Johnson. Compared side by side with one purchased four years ago, it was an unexpected disappointment, like when you pull a piece of candy out of your pocket and discover it's melted to the wrapper.

Speaking of melted candy, this one is just as sticky. Instead of the soft velvety texture of plastic I expected from Doc Johnson, having owned several toys with Velvet Cote before, I was shocked to find a rubbery, sticky texture that refused to improve with cleaning. I scrubbed it and let it dry repeatedly, firt with antibacterial soap, then with toy cleaner, and finally with dish detergent. It failed to improve.

Not one to be deterred, I pulled a fresh lint free cloth out of my electronics repair kit and wrapped it around the toy, to keep the icky texture away from my fingers. Fortunately the awful stickiness did not extend to the business end of the toy.

I've always liked the bumpy and rigid surface of the Pocket Rocket for my quickies, and this toy is of course the same. If you only like soft and squishy things against your lady bits, look elsewhere. If you're cool with firm, you'll like this one, although I must recommend one of the other identical-looking Doc Johnson Pocket Rockets over this one due to the weird plastic.

Since the Pocket Rocket is an external toy, the size matters only in that it's easy to store or hide, fits in a purse or pocket easily, and would be fine for travel. It's well below the maximum size TSA allows for carry-on tools, and as long as it travels without the battery inserted, it won't turn on during transport.

Pocket Rockets are the perfect size and shape for a quick clit tickle before work in the morning, to sneak into the shower, or to use during sex. I personally prefer them to a bullet, and although obviously they aren't meant to compete with hundred dollar luxury vibes, I think they remain useful even to those with fancier toys in their collection.

Beginners might find a Pocket Rocket a good investment because it will help establish their tastes in vibration level without shelling out too much money, or buying something that their very next purchase will render completely obsolete.

This particular Pocket Rocket is a little less powerful than my previous one. I compared the two side by side, and it was definitely weaker. I even switched batteries and redid the test, with the same result. It's strong enough to get the job done, but the other one's stronger. I'm not one to demand too much power, and many toys are actually too strong for me, but I was disappointed with this one compared to the allegedly nearly identical product I already owned.

Both, however, are stronger than the off brand pocket rocket in the bottom of my big sack o bullet vibes.

The noise level is also slightly higher in the newer vibe, although it can't be heard through a closed door and can easily be disguised with music or television. The twist base is moderately annoying, but serves as a useful enough control on a ten dollar toy. I actually prefer a twist base on cheaper toys, as buttons are so often the first thing to break. The functions on this pocket rocket are basically "on" and "oops, the battery fell out" but at least it turns off quickly if you think you're about to get caught.

As for the waterproofness of Pocket Rockets, I've submerged them with no ill effect. The old one has been under water many times, and this new one got washed a dozen times before getting tested. I don't recommend turning them off while under water, lest the battery cap pop off, but with moderate caution they'll survive. If you do get water in it, turn it off immediately and do not try to run it again until it's spent several days drying in a bag of rice, just like when you drop your cell phone in the hot tub.

The Pocket Rocket can be cleaned with antibacterial soap and hot water, or with toy cleaner. Be sure to clean around the metal nubs on the end, and dry it off before storing it, preferably sans battery. Never boil a toy with a motor, as it likely won't survive. Bleach solution can cause damage to the surface of plastic toys, but they can be wiped down with alcohol. I have also scrubbed Velvet Cote toys with a mixture of hydrogen peroxide and baking soda with no ill effect, although I'm not sure it's recommended practice. This one's soaking in such a concoction right now, in hopes of finding the silky soft Velvet Cote beneath the weird rubbery surface.

This toy came in my very favorite form of toy packaging -- a clear sleeve of plastic that requires no stealthy recycling bin antics. It didn't have any instructions or anything else packaged with it.

I expected this toy to be exactly the same as my previous Pocket Rocket, only in a prettier color, and was surprised to be disappointed. I'd seen reviews calling it weak, and assumed that everyone these days expected Hitachi-strength from everything, even rolling my eyes a bit, because my Pocket Rocket was quite strong.

However, this one actually is weaker, and the stickiness is a real turn off. I will keep it and use it, but if the current soaking doesn't fix the texture, I'm going to take sandpaper to the darn thing, because I won't be using anything near my ladybits that is unpleasant on my fingers.

While I can't recommend this particular Pocket Rocket, I do recommend the original. It's been my go-to toy for quick, if not terribly exciting, bits of fun for years.

The original pocket rocket black
$25.79
Follow-up commentary   I've started to like it more 8 days after original review
It's a little early for a follow up review, but I wanted to make sure everyone reading my review got this important update -- after soaking this toy in baking soda and peroxide, I took a scraper to it, and removed all of the melted velvet cote, leaving smooth hard plastic.

I've had several toys with this finish before, without the problem described in my review, so I'm wondering if perhaps this got melted while in transit. It has been an awfully hot summer.

It's still weaker than my other Pocket Rocket, but it's usable now.
This content is the opinion of the submitting contributor and is not endorsed by EdenFantasys.com