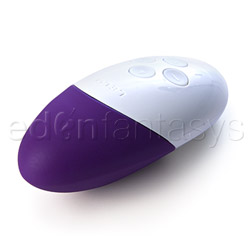 A silent friend to help you to an explosive night

In any case, Siri is a vibrator of moderate strength which will work for most people, provided they like her style of vibration. She conducts vibration through the colored part of the toy (on my toy, a lovely purple) with four control buttons on the uncolored part (on my toy, the white part). The vibration is conducted fairly evenly throughout the colored surface area of the toy, whereas it's far less felt in the white part, making Siri a pleasure to use since she doesn't make your hand totally numb after three minutes. On the other hand, the vibration isn't focused in a tip, the way it would be in a pocket rocket, since Siri doesn't really have a tip so to speak. Sure, there's the nose of the toy, but this doesn't quite allow for the same targeted vibration as other toys might allow.

Nonetheless, using the Siri was an utter pleasure. Her vibration comes in a variety of distinct patterns, easily manipulated using buttons on her control panel. I found the rumbling motor pattern particularly enjoyable, and ended up lying back with Siri cradled in my underwear and just letting it run for awhile. Siri can be adjusted up and down for intensity, and while her intensity won't satisfy those folks who need crazy vibration (think: hitachi), it should do the trick for most people.

Siri has a white plastic control panel/handle and a velvetty surface to the vibration part itself. It's fabulously smooth. I found no drag on the toy even without being naturally wet or applying lube, making this a wonderful toy to start off the night with.

I thought the Siri was cute as a button. And, indeed, it's barely bigger. Siri fits in the palm of your hand, and comes with a pouch that easily holds her and her charger. Great for travel! And, best of all, Siri is silent. I mean, we're not talking perfectly silent, but definitely not noticeable if she's being used under blankets. As someone who shares an apartment with very thin walls, I really appreciated that I could get a strong vibration without worrying about my roommates hearing.

Overall, Siri looked good and felt better. She was well worth the investment, and I expect to use her regularly.
This product was provided at a discounted price in exchange for an unbiased review. This review is in compliance with the FTC guidelines.

My Siri tags
About author