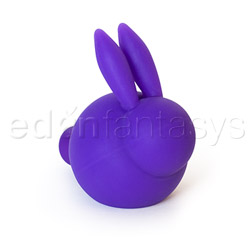 If you're in it for the cute factor and enjoy mild vibrations, you might like this toy. But it's quite noisy and it might not be worth it for you if you prefer stronger vibrations.
Pros:
Cute
Discreet
Easy to clean
Silicone is awesome
Cons:
Loud
One setting
More bark than bite
Kind of small
Rating by reviewer:
3
useful review

The purple silicone of my bunny was very velvety, and the body was quite soft. Because it is made of silicone, it has little to no odor and is completely non-porous. The little ears are my favorite part since they carry the vibrations in a unique way. There is a small seam, but it didn't bother met at all. The bullet can be removed from the bunny's butt and the silicone body boiled, washed, or rinsed in a 10% bleach solution to be fully sterilized. I don't know if the vibe is waterproof, but the bunny's body would be.

The bunny was a lot smaller than I expected it to be, but I should have known because there are multiple measurements and photos on the site. It easily fits into a closed hand, and therefore doesn't provide an all-over stimulation of the vulva as I had imagined (again, a fault of my own, not the design). In general, it is a cleverly designed and cute toy, great for a beginner, younger user, or someone who is a toy or cute-things collector. You can hardly tell it's a toy until you push the button on the bullet. That button is also not easily pressed, so it probably won't start vibrating on its own any time. As for travel, the electronic bullet might have to be removed for screening, but I doubt anyone will take offense to it even then.

There is one button and one setting for the bullet, which I think is a little disappointing for such a well-designed toy. The vibrations are moderate, but the noise the bullet makes is much, much louder than necessary. The button is easy to find and pretty easy to press; it sticks out from the body well and feels distinct. I didn't try to get the bullet wet because I wasn't sure about the seam around the battery. But the toy itself is soft and might feel nice for an erotic shower massage, although it wouldn't be something to write home about.

It's very easy to care for this toy. Just remove the bullet (which I would wipe down with alcohol or something because I'm not sure if it's waterproof) and boil or wash the silicone body in the dishwasher. It does collect lint a little bit, so you'll need to rinse it sometimes before use. Otherwise, it's a very low maintenance toy. Silicone is incompatible with silicone-based lubricant. I would just use water-based to be safe, since I don't know how oil-based would work with it.

Packaging was adorable! I came in a plastic mold inside little rabbit-hutch box, brightly colored and very fun in design. There was an adoption certificate (I made my partner sign as a witness to the birth). The package could be used for storage, but it might wear down after a while because it's disposable plastic. I would want to keep the box just because it's so cute, though!

I honestly considered returning the toy because of the size and the noise (mostly the noise). I'm torn because I spent $15 (with discount) on this toy, but it's tiny and I'm not sure it is going to help me get off at all. The cute factor is a major player, though, and I think I'm going to give it some more time and try to play with it more before I decide to give it a new home or not.

Although the bunny seemed to vibrate strongly and was quite noisy, when I attempted to play with it, it really didn't have much vibration depth. Used on the surface of the skin or genitals, it's quite tickly and the vibrations can be felt well, but if you apply more force it kind of deadens the vibrations a little. Still can be pleasurable, but its bark is louder than its bite.
Follow-up commentary   I don't like it anymore 12 months after original review
I'll admit it. I think I was wooed by the sheer cuteness and kitsch of this little toy. It was fun while it lasted, but after the second battery replacement, the bullet totally crapped out on me and died. There was little that Eden could do because I was past my 30 day guarantee period, which is understandable, but it was frustrating to be stuck with a broken toy that I had been so excited about. I don't know if the flaw in my toy was just cheap construction or if it was a fluke. I might still recommend this toy to very very wary or immature beginners as it is very welcoming and cute, but only if you can get it on sale. The expensive batteries, low buzzy vibrations, and risk of breakage (and heartbreak) just isn't worth it. I wish I could love this bunny.
This content is the opinion of the submitting contributor and is not endorsed by EdenFantasys.com