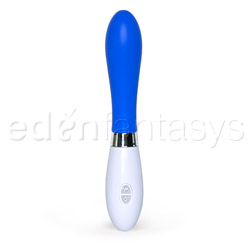 Adding insult to injury (not literally), the vibrations were too focused near the middle of the toy to be great for either clitoral or vaginal stimulation. I didn't think I was demanding in terms of toy intensity, but it was BORING. It's silicone, which meant I could only use non-silicone based lubes, but those didn't help the experience.

As my second toy ever, it was really a letdown. I was expecting moderately strong vibrations in something that was good for penetration, which I was fairly certain I was going to like. It did work well as a dildo, playing second fiddle to a bullet vibe, but honestly the 'supplementary vibration' was mostly motor noise. However, I didn't particularly like the curve of it, and it felt like it was just far enough away from the more sensitive areas of my vagina to be more of an irritant than a fulfilling stimulus. The same was true when I attempted to use the tip as a clitoral stimulation. The shape just wasn't right for my body. I'm not particularly large, but the shape was awkward. Additionally, the buttons were hard to find, being not very raised off of the body of the vibe. If it's in a condom or lubed up, you can forget about finding the buttons.