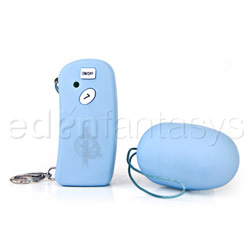 A great idea that fell flat. This broke almost immediately and ended up in the garbage! You can't cut corners on wireless vibes.
Pros:
Cheap
Many vibration patterns
Cons:
Breaks easily
Poor vibrations
Poor value overall
Rating by reviewer:
2
useful review
I bought this toy with high hopes of taking advantage of it for some discreet pleasure controlled by my boyfriend. I liked the idea of this toy, and the shape was also interesting. But, I will admit it was the price point that got me. Wireless remote control vibes can be quite expensive! So, I sprang for this one on a whim and was sorely disappointed.

In essence, this should be a simple toy. A plastic vibe that you can insert and a remote that cycles through vibration patterns. My first problem was the batteries required. They were inconvenient and a bother to replace. My next problem was the remote itself, it was too simplistic and the signal was dodgy. Why have a vibrator that can't get signal from inside of you? Third, the vibrations were weak and under stimulating. I was really bummed out by this toy in the end. The 7 speed/feature idea was alright, but I did find that the few times I used it I didn't use all 7. It didn't float my boat even while it functioned, and it's overall failure was exactly that: a failure.

I got two uses from this toy before it stopped working entirely. I'm not sure if the vibrator broke, or if it was the remote. But, that doesn't really matter. I didn't want to devote any time or energy into this broken toy. Though, I am sure someone with more knowledge may be able to salvage/soup up this non-functioning toy, I don't know that it would be worth it in the end. I certainly feel like my money was wasted and I would not recommend it to anyone. If you really want a wireless vibe, save up for a little longer and get yourself something better! I definitely learned something from this purchase; you get what you pay for!
This content is the opinion of the submitting contributor and is not endorsed by EdenFantasys.com