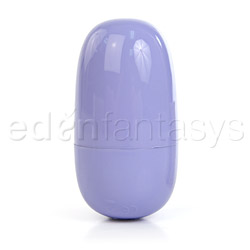 The iTap egg is a cute little toy that uses touch technology from which I wasn't expecting much. But I was impressed at how strong the vibrations were, the range of functions, and how well the toy worked. It's also really nice having a small toy that's not connected to a wire and that can be used and controlled all with one hand.
Pros:
Multifunction, good vibrations, discreet, fun technology, easy to use, no wires, long battery life
Cons:
learning curve to using the touch feature, not waterproof
Rating by reviewer:
4
extremely useful review

The iTap egg is made of smooth hard plastic. It came out of the package with no taste or smell whatsoever. It has no texture to add interest, but since it is a bullet mainly for clit stimulation, I really like the simple smoothness. If it gets too wet from any form of lubrication however, it can be a bit tricky to hold on to.

This toy is a little bigger than most egg or bullet toys, coming in at just about 3" long and 1-1/2" across. The ends are also flatter than an actual egg or most bullet toys, there is no real point on either end. I happen to like this because it's a little easier to hold on to, especially taking into consideration the delicate touch function.

When you twist this egg, it opens into two halves about 2/3 of the way down. You simply insert 2 AAA batteries and close it back up. It can be a little difficult to close completely and even once it appears to be closed, needs about another quarter turn to seal completely and function. Seeing as it can be turned on accidentally so easily, I like that it's not too easy to close. This means that instead of removing the batteries when not in use (because this toy WILL bump into other things and turn on), I actually just untwist it to the point where it will not turn on but also will not open up.

It is small and discreet for those looking for something easy to hide, and is not particularly loud. It has several speeds and functions, but on its highest vibration I couldn't hear it with a comforter and pillow thrown over it. On the downside, this toy is not marketed as waterproof so keep this one in the bedroom (or living room, dining room, or kitchen table for that matter - just someplace dry!).

The iTap's vibrations and speeds are what totally makes the toy worthwhile. While the touch technology is a bit of a hassle but also really fun and convenient, it's not why I like the toy so much.

To use the toy, you need to just lightly tap the center of the base on the wider end of the egg. The functions are:

The vibration speeds are just right to get me off quickly and easily, especially the high vibration function and the last function that alternates between a high and low vibration.

The biggest flaw of this toy is how easy it is to accidentally change the speed, but I found that once I was familiar with the toy, it was easy to learn how not to do this. It only reacts to a touch at the very center of the bottom, so as long as I held it either around the sides or even on the bottom rounded corners of the egg, there were no problems at all. I slipped up and covered the bottom of the egg a few times with my hand at first, but have since gotten used to holding it a certain way. This learning curve may not be something that everyone wants to deal with though and if you want something more straightforward and less prone to accidental function changes, it may not be for you.

I now find it very easy to use and love that there is no wire attached and no other hand required to control a wired or wireless remote. All the work can be done with one hand, leaving the other free to use a second toy, pleasure my partner, or just relax.

I'm still using mine after a few weeks with the same batteries I originally put in and it's still buzzing strongly so this one is efficient as well.

Since the iTap is smooth hard plastic, it is a very easy toy to care for. It can be used with any lube and simply requires a careful washing in soap and water after (and before - just to be careful) each use. The toy is not waterproof, but it does actually have a small clear rubber seal inside the very tight closure and I have had absolutely no problems with water getting in while I wash it. For those concerned with water getting in, a spray with toy cleaner or a toy wipe should work just fine as well. I store mine among other clean hard plastic toys because it is a stable material.

The iTap came in a small box, with a bag inside that contained the toy and instructions on use and battery insertion. The box was pretty and somewhat discreet (no naked women, etc.) but not worth keeping.

In addition to this being my favorite tiny small vibe for great orgasms from clit stimulation, I've also found that it works wonders for external p-spot stimulation on my man. If I hold it at the right point on his perineum, especially while he's already using one of his internal p-spot stimulators, it makes the whole experience more intense for him.
Follow-up commentary   I still like it 4 months after original review
I still think this toy is great technology coupled with a great motor and body. The tap function still works beautifully, it's very easy on batteries, and for me, personally, the shape just works well.
This content is the opinion of the submitting contributor and is not endorsed by EdenFantasys.com