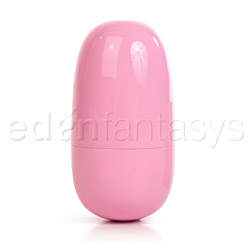 While it's very cute and a really nice idea, this is a toy that may not always satisfy. It has good vibrations and would be nice for warm ups and foreplay, but for full on enjoyment it's not likely to go the distance for you.
Pros:
Simple, cute, very neat idea.
Cons:
Turns on too easy when you don't want, won't switch when you do want.
Rating by reviewer:
3
useful review

This is a very simple product that keeps its sleek feeling with simple pink hard plastic. There is one single line around the middle, but that's not a problem since this stays on the outside. There is also no strange plastic-y smell, which happens sometimes with new toys.

The design is a simple ovular egg. It's nice to look at, but nothing too special. I think it could use a base to stand it up on, since it rolls around so much, but other than that there are no major issues with it's design. One problem some girls may find is that because of it's large round shape, it can't deliver quite as much direct clitoral stimulation as it would with a little tip. The design also makes it so there's no way you can play with it, without actually holding it.

The iTap egg has quite a few levels and patterns which are very fun to play with. The downside of that is that because it is a touch-product, you have to keep tapping it to find what you want. Because of the very round, not specific shape, it's hard to pinpoint the vibrations it (which can be quite good) exactly where you want them. Also, there's no hand area for you fingers, so they don't go a little numb. Really, the biggest issue is that if the back of the egg bumps up against your leg just as your reaching your happy place, it's quite likely to switch levels and throw you off very easily.

This item has a very very simple clean up thanks to all-over smoothness. Just a simple wipe-up with soap and warm water, or your favorite toy cleaner, and you're all done. Storage can be tricky if you don't have a place you generally keep your toys. A good idea might be to find or make a little pouch that you can keep it in so it doesn't roll away from it's spot. Also, taking the battery out when not in use will probably save you some issues when traveling. We tested it a lot against floors and walls, and it's pretty unpredictable what kind of pressure will turn it on by itself.
Follow-up commentary   I don't like it anymore 13 months after original review
After quite a while of not being used, I went back to this cute little toy out of curiosity and hope that maybe I just hadn't given it a good enough chance the first few times around. I was wrong. I don't think I mentioned it in my original review, but there don't seem to be any little markings that show how the batteries go in once you've taken them out. This means I spent a good little while trying the batteries out in different ways. In the end, absolutely nothing worked. It seems the thing died from loneliness after being in the bottom of my toy bag for a little too long. Hopefully this was just a glitch with mine alone, but it might be something to keep in mind when shopping for a "once in a while" toy.
This product was provided free of charge to the reviewer. This review is in compliance with the FTC guidelines.