And the winner of 2012’s Gayest City in America award goes to... 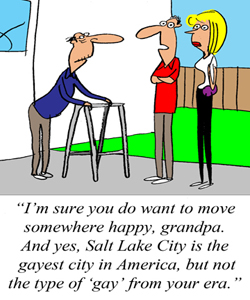 You might be pleasantly surprised!
It’s that time again! The Advocate has tallied up the information using their “decidedly subjective criteria” to give us a list of the The Gayest Cities in America, and we have to say, that when it comes to leaving out cities like New York and San Francisco, they kind of have a point. “…do we really need another article telling us that homos gather in West Hollywood and Hell’s Kitchen?” asks writer Matthew Breen, and in fairness we do not.

Instead the magazine takes criteria like the number of nude yoga classes, LGBT bookstores and elected officials, among other things, and divides them by the population of the city limits. You’ll just have to click on the story to see the other criteria.

There’s a list of ten honorable mentions, which includes New Orleans and Pittsburgh, but the top 15 includes surprises like Little Rock and Grand Rapids, and no-surprise-at-alls like Atlanta and Fort Lauderdale. Our own private Idaho –Orlando– rocketed up two places in the countdown since last year’s list but the biggest surprise was the that Gayest City in America is … Salt Lake City?

Well, we’ve never been so we’re not going to argue. Though we have to wonder if having a huge musical number from The Book of Mormon didn’t subconsciously help a whoooole lot.
Tags:
Views: 990
Related articles