Science Figures Out How “Gaydar” Works 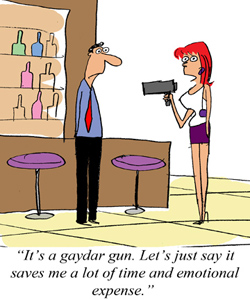 We told you we could tell!
Science often comes up with the hard facts that back up the assertions we hear all the time in pop culture, stuff like “Love is a drug,” “It’s in his kiss,” and now the idea of gaydar. Do some people have the ability to tell if someone is gay just by looking at them in the absence of speech, affectations or a “God made me gay” t-shirt?

Dr. Susan Hughes, an evolutionary psychologist, said the team found “that the more likely raters perceived males as being attracted to women (i.e. holding more of a heterosexual orientaiton), the more symmetrical the males’ facial features were.” The study also found that straight men were more likely to have more masculine features, but facial symmetry played a larger role in assessing sexual orientation.

Hughes also said that “gaydar” could be an adaptive trait because “in mate selection and romance it’s crucial to recognize [others’ sexual orientation].”

Could it be then that lack of interest in reproducing is why some people –and by “some people” we mean us– are forever crushing on the gays? Anyone? Anyone? Bueller?
Tags:
Views: 1226
Related articles