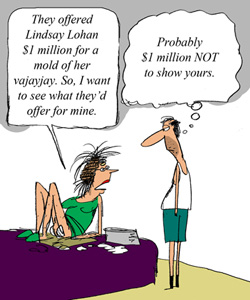 ... Or you can look at pictures of the real thing in Playboy.
Lindsay Lohan's vag must be made of gold. It just keeps raking in the million-dollar offers.

We'll get to find out soon enough, it seems, cause the troubled starlet has done a Playboy shoot for just under her $1M asking price. And she didn't wimp out like some other sexy celebrities and opt for just showing a little skin. Instead, she did a full body shoot, only asking that the photos be tastefully done! It may have been just the outlet she needed, too, cause then she showed up early for morgue duty the next day!

Unfortunately, a source close to LiLo says she'd never agree to such a thing. It's just not her bag. Though we're pretty sure they said the same thing about the Playboy shoot. So who knows, eh?
Tags:
Views: 1491