Will the World's Tallest Transvestite please stand up? 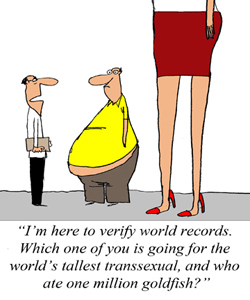 Ooo, maybe she'll let us play with her whip!
At 7 ft. tall, 280 pounds and with size 16 shoes, Lindsey Walker, a striking (if the riding crop in the photo is any indication) Amazon formerly known as Greg, could become the world’s tallest transexual. Lindsey has contacted the folks the Guinness World Record book in hopes of getting in as the world’s tallest transvestite, the UK Sun reports, but when she undergoes sexual reassignment surgery that could make her the tallest transgender person in the world. The Ohioan has been taking female hormones and living as a woman for two years and so is now legally recognized as female

When Lindsey was “Greg” she was a jock who played basketball and had girlfriends but it never felt right. She was offered a basketball scholarship “to study economics and marketing at a top college,” but turned it down because she was finished with what she calls the “charade.”

By the time Lindsey was 21 it had gotten out of control and she started drinking, but then, she says, “One day it just clicked and I knew what I had to do. I started wearing women’s clothes and turned to female hormones to suppress the testosterone in my body.”

Parental acceptance and support helped her make the change and who knows? One day she could be in the record books.

That pumpkin in the photograph who’s looking right at the 7 footer’s crotch –click the above link for the picture!– is probably thinking the same thing.
Tags:
Views: 1169
Related articles