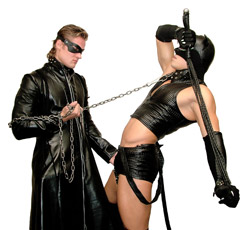 Leather has a well-established niche in gay history. A look at the macho pioneers—from military men to bikers and artists—who shaped leather culture as we know it today.

It’s nothing new, but straight men have been slowly getting more in touch with their feminine sides, in ways both emotional and aesthetic. And while that’s not at all a bad thing, I like to think that masculinity is just as beautiful, legitimate and valuable as femininity. I love masculinity. I love the culture of men being men, being gentlemen: the clothes, the haircuts, the strength in competitiveness, independence, ambition and assertiveness. I want to celebrate the best of masculinity, but it’s just not in vogue right now.

When talking about the feminization of men in culture, fingers are often pointed at the metrosexual trend, and some vague stereotype of an effeminate gay man masterminding it all. Actually, as gay culture gains a greater foothold in society, it seems to be given accord largely through this feminized stereotype. And while femme gays may garner more attention, gay culture has rich roots in masculinity that is rarely spoken of. Perhaps uncovering this dusty history could allow for a broader and more accepted celebration of all men?

In my search for machismo in gay culture, I decided to focus on the history found at the Leather Archives & Museum in Chicago. (Where else?) My partner and I were greeted by a large bald man with a goatee and a soft voice, who led us on a private tour of the gallery, full of photos and comic book-like paintings of leather daddies, vintage leather wear, paddles, whips and all sorts of intriguing paraphernalia.

Leather is a fetish—a kink—and the fetish at hand is all about masculinity. While taking in a room full of leather vests, jackets and military uniforms, our tour guide explained that during World War II, some soldiers realizing that they were gay, began exploring their sexuality while deployed overseas. After returning home, they missed the “manly culture” and began to recreate it in their own social groups and bars.

In the 1940s, one way that men could meet up in the pursuit of “manly things” was through motorcycle clubs. Out West, there were many motorcycle clubs during this period, whose bikes and leather caps disguised the gangs’ true sexualized agenda. The different clubs would go on rides, during which (according to our tour guide), sexual escapades ran rampant.

The motorcycle clubs also worked to the masculine-loving man’s advantage socially. In the 1940s, two men hanging out together would draw attention and raise eyebrows, but a group of men (especially in head-to-toe leather) were simply written off as a gang. Which is technically true—a gang that was into group-orgies, that is.

While rivalry is obligatory between straight leather gangs, such as Hell’s Angels and the Pagans, in contrast, the Leather Archives Museum displays a book of friendship buttons traded between clubs that bikers proudly wore on their jackets, that were earned by having sex with members of “rival” gangs. One’s button-filled leather jacket became a sexual résumé of sorts.

From the ’50s on, the leather culture really took off, leaving the bikes behind. Though certain early San Francisco gay bars were designated leather bars—where masculine guys could find other like-minded men and show off their new wares—it was the Gold Coast in Chicago to actually bill itself as a “leather bar.”

Original artwork created by gay icon Etienne graced the Gold Coast’s walls. His life-size paintings of comic book-like images of men in leather and chains embroiled in sexual situations are now displayed prominently throughout the Leather Archives. Also featured are the mischievous artistic renderings of Tom of Finland—a personal friend of Etienne’s. The two wrote letters and traded art depicting ridiculously sculpted men who often found themselves in humorously sexual situations—a macho version of the retro pin-up art of the day. Friends of the pair would later hold a joint exhibition in Greenwich Village attended by both Andy Warhol and Robert Mapplethorpe.

Another development to come out of the leather bar scene was the International Mr. Leather Contest—an annual pageant pitting contestants against one another in categories such as: “Pecs & Personality,” “Leather Image,” and “Presentation Skills.” The event takes place in Chicago, and has been going on since the Gold Coast’s heyday in the ’70s. What began as a small affair with about a dozen contestants and took place over a long party weekend, has evolved into a huge event that now boasts a world-wide audience of kinksters.

As the leather bars gained popularity, the underlying culture became more niche. The Leather Archives currently hosts an exhibit of a recreated bar scene, with items culled from actual leather bars of the past. A vintage sign reads: “No disco wear, no suits, no rugby sweaters,” proving that, at least in the leather bars, it was in fact not hip to be square.

One seemingly forgotten aspect of leather culture one can learn about at the Leather Archives is flagging—the infamous hanky code. As legend has it, when going out to a leather bar or on a group ride, a leatherman wore a hanky in his back-pocket—the color, design and placement of which signified precisely what kind of naughtiness he was looking to get into that night.

According to the Leather Archives & Museum’s Leather Times, the hanky code actually started out as a joke, first printed in Queens Quarterly in 1969. Supposedly, the columnist was late on deadline and needed an article. After joking with some friends, he came up with the ludicrously specific and often hilarious hanky code. It would be a few years before the idea spread with the help of two other kink publications, Scene and Machine and Drummer, each of which printed hanky codes of their own in the ’70s.

The magazines could not reach a consensus on green. Scene and Machine reported that green worn on the left was reserved for hustlers selling and on the right for those seeking a hustler’s services. Drummer stated that green on the left was meant to signify bondage, as a top, while right was for bondage bottoms.

As we left the Leather Archives & Museum, it occurred to me that while BDSM and leather fetishes often overlap, I was surprised by the lack of images depicting submission and domination in the exhibit. The picture that stands out most clearly in my mind that is of two muscle-bound guys, in full leather regalia, groping one another’s hard cocks. It was impossible to tell bottom from top. The sex looked like an exchange between equals; like the manliest kind of sex one could have. What is captured is the freedom to be oneself, to accept oneself, which proves my point: celebrating masculinity is not a bad thing, but a wonderful thing.
Tags:
Views: 2141
Related articles