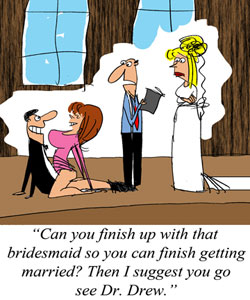 If monogamy isn't for you, 'fess up. Addiction doesn't seem like it's the real problem.
Fellas: Today we'd like to teach you a couple words that just might save you a whole hell of a lot of trouble with the ladies -- and a trip to Doctor Drew, to boot!

If Jesse James had known these words, his alleged extra-relationship sex acts might not be such hot news.

Kat Von D is finally opening up about just how uncool her relationship with Jesse James was. Seems the motorcycle customizer's got a serious problem keeping it in his pants. Kat says he cheated on her 19 times before they broke up. And that's just the ladies she's heard about.

Sandra Bullock, Jesse's ex-wife, just sort of shook her head when she heard the news as if to say she wasn't surprised.

“There’s no question Jesse’s got a big problem,” said a source close to the situation. “He’s got to get help. ... But I’m worried he won’t do anything, because he hasn’t faced the fact he has trouble remaining faithful.”

Sure. Jesse needs sex addiction treatment. Like we all need holes in our heads. We're thinking if someone would just teach him how to lead off relationship conversations with “I'm actually more polyamorous than monogamous.” this whole cheating “problem” wouldn't be much of a problem after all.

What's Kat got to say about it all?

In a post on Facebook, she says, “Time is something you can never get back, and what we do with this very present moment is the most real thing we have. So if that's the lesson Jesse forced me to face and learn by all of this, than all I can say is Thank You.”
Tags:
Views: 1618