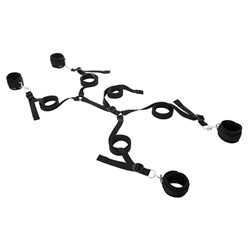 Under the bed restraint system

Under bed strap kit
by Sportsheets

Other Under the bed restraint system reviews

This comfortable restraint system will have you begging your partner to tie you up and have their way with you!
Pros:
Comfortable, adjustable, durable
Cons:
None
Rating by reviewer:
5
extremely useful review

Before my boyfriend and I even started dating I asked him how he felt about bondage. He said, "No way!" As I slowly and painstakingly introduced him to the toy world, however, he became more adventurous. When he told me that he was "willing to try anything," I knew it was my cue to bring up bondage again. This time he was all for it. He was even the one who went online and discovered this little beauty: The Under the Bed Restraint System. This system is the best thing that ever happened to our sex life. I strongly recommend that everyone buy this system and let their partner tie them up and vise versa, because it is sure to bring out the freak in anyone.

The material of the Under the Bed Restraint System is so comfortable. I think a lot of people worry about comfort when they think of being tied up, and I'm telling you that comfort is not an issue with this system. The ankle and wrist restraints are soft and padded and they don't dig into your skin, even when restrained pretty tightly. The straps are durable and hold up to the struggles that both me and my boyfriend can put up. Everything is adjustable, so it can fit any size bed and any size person, as well as be arranged in a variety of positions.

The Under the Bed Restraint System not only met my expectations but greatly surpassed them. It is significantly more comfortable than I imagined and very durable. I love that it adjusts to any person; I can restrain my boyfriend just as effectively as he can restrain me! I also love that I can't squirm my way out of it.

My Under the Bed Restraint System is currently hooked up to my boyfriend's bed. We just tuck it inside the sheets when we aren't using it and nobody can even tell it's there!

As I said before, my boyfriend was initially not down for bondage. When I finally persuaded him to give it a shot he said he would tie me up but I couldn't tie him up. I like being submissive, so I was okay with these terms. Since we got our Under the Bed Restraint System, however, we have both been tied up on multiple occasions. I never thought I would like tying him up, but I do! While nothing gets me hotter than the idea of my body being completely at the mercy of someone else, I've discovered that it's almost equally sexy to have someone totally restrained and to be in the powerful role. I feel like this system has not only opened us both up to different things, but it has helped us to trust each other more. I really do think that everyone should give this product a shot, because it introduces you to a world that you might be a little wary of and it can make your relationship stronger.
This content is the opinion of the submitting contributor and is not endorsed by EdenFantasys.com

Reviewed by Savannah (Eden Advanced reviewer) A word is dead when it is said, some say, I say it just begins to live that day
Rank
5.1
wrote 8 reviews
This review was edited by
Comments
Make a post
Forum
Thank you for viewing Under the bed restraint system – under bed strap kit review page!
Top