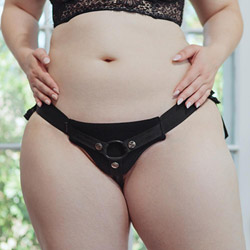 Double strap harness with back support
by Sportsheets

I Now Proclaim Myself Diva-licious

The Divine Diva is a remarkable piece of sexual engineering. The harness fits like a dream and can accommodate a wide range of bodies – from size 12 to well above size 32W.
Pros:
easy adjustments, stays in place during use
Cons:
none
Rating by reviewer:
4
useful review
In my more cynical moments I think of Freud as being some coked-out huckster who had an unhealthy obsession with the libido. When I’m experimenting with a harness, I think Freud may have been on to something. I may have been suffering from penis envy without even knowing it.

I now believe that having a penis is a remarkable, liberating thing.

I’m as surprised as the next person by my reaction and I think I’ll have to underscore the fact that this is my very first harness. The only thing I have to compare this to is… well… nothing.

The idea of taking a harness for a test run came from a conversation with a male friend. I can’t remember how all this started, but at one point I observed how nice it would be to fuck him anally. Wonderfully open-minded sexual adventurer that he is, he also thought that me fucking him anally was a pretty good idea.

There was certainly more to the conversation – something involving a couch and exotic, faraway lands – but the seed had been planted. The preparations were set in motion.

A week or so later I’m standing in my living room with a penis.

The Divine Diva harness is simple and straightforward in its construction. There’s a padded strap that rests against your lower back and a second padded cushion with an O-ring attached that rests against the mons. Everything is held in place with the help of two thin nylon leg straps that are completely adjustable.

[For those of you who haven’t tried this before – putting on a harness is a lot like stepping into a pair of panties. It sounded all mysterious until I did it myself, but it’s really a piece of cake.]

Fitting the Divine Diva to your body is easy and straightforward. I stepped into the harness, pulled it up to my waist, gave the straps a good tug, centered the back cushion, and voila! After taking a moment to tighten the thigh straps, I was good to go.

Clearly, I’m still new enough at this for everything to be a novelty.

The straps can take a fair amount of pulling and pushing before they start to loosen. I have the feeling that some amount of tightening is inevitable with any harness that does not have a buckle closing. When tightening did become necessary, it only took a quick tug to tighten things up again.

Cleaning is easy. I tossed mine into the washer on the gentle cycle and then hung it in the shower to dry. Although the manufacturer does not provide washing instructions, I would assume that the material would also do well from being hand washed.

Even if you’re only vaguely interested in giving a harness a try, I would recommend the Sedeux plus size harness in a heartbeat. It’s user friendly, body friendly, and immediately breaks down the intimidation factor I believe had been holding me back from trying a harness sooner. It’s opened up a whole new world of sexual experimentation that I can’t wait to learn even more about.
This product was provided free of charge to the reviewer. This review is in compliance with the FTC guidelines.