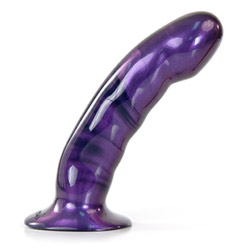 It is clearly a very well-made item. (I mean, what else would you expect from Tantus? They're like the Lecreuset of dildos.) There are no seams and the whole piece is smooth save for the Tantus stamp on the base. I did do a flame test on the edge of the base and it yielded only a little pale ash, no melting and no smell, so I was confident in the quality of the silicone. I also liked that it managed to retain a phallic shape without looking too "penis-y", but I guess I don't like a lot of aesthetic realism in my toys. I got the midnight purple and thought it was just lovely, it even has a hint of shimmer when it catches the light.

On their website Tantus tells you that you can actually sterilize their products by baking them in the oven at 350 degrees Fahrenheit for 30 minutes, but I haven't been brave enough to try that yet!

My Acute tags
About author