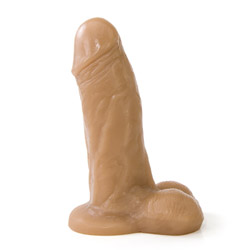 While not the star of my collection, Vixen's Lone Star is a welcome recurring character.

Oh, and since I mentioned the lack of odor, VixSkin also lacks any real taste. Both odor and taste are comparable to, say...the smell of new shoes. It's at least somewhat noticeable at first, but isn't overbearing or unpleasant, and it fades with time.

In terms of texture, the Lone Star boasts a realistic and noticeable corona, a veiny shaft, and a pair of realistic...cut-in-half balls. The veins on the shaft are a bit aggressive in design, and any human with veins like that might want to consult a doctor, but the VixSkin makes them barely noticeable--at least anally.

The Lone Star looks like a penis, there's no getting around that. So, anyone with a point of reference who happens to see it is going to immediately know that it's a model of a penis. I don't think many people keep penis-models for artistic merit, so how discreet it is is as good as you are at espousing the aesthetic qualities of genitalia.

The Lone Star is a breeze to clean. The VixSkin is very versatile, and can be boiled (up to 3 minutes) to disinfect it, or even just thrown into the top rack of your dishwasher. I usually just give him a good rub-down in the sink with some anti-bacterial hand soap before & after use. I threw out the packaging when I got it, so I just store him upright on a shelf. Yeah, he collects a little dust, but that's why I wash before use.

Oh, and also: DO NOT use anything but WATER-based lubricant. VixSkin is fantastic, but it is silicone-based, and silicone and oil-based lubes can destroy it. Nobody wants that.

The package is reusable for storage of the Lone Star, though, if you have the foresight to not just throw it away. Apparently it helps keep the dust off between uses. Who knew?