Wands You Use This You'll Never Go Back!

The first time I had sex, I couldn't orgasm. Who I was doing it with said, "I'll get a Hitachi. It's so good, it's like cheating." Truth is, it didn't get me to orgasm either, but the experience inspired me to buy a Hitachi of my own. Since, I've had much pleasure by myself. It has become my favorite vibrator yet, because I take a lot of sensation to feel anything. Trouble is, the Hitachi can provide too much or too little pressure, unless you have the (sold separately) speed control box too.
Pros
Strong vibrations, outlet-powered, not a lot of crevices to clean
Cons
No batteries, +1 speed, noisy, too slow, too fast, can't sterilize
Rating by reviewer:
4
extremely useful review

Technically a "body massager," the Hitachi Magic Wand is intended to be used on sore muscles all over the body, not on the genitals (most popularly, the clitoris), as some choose to do.

It is even been commonly advised, "The product was never intended to be used there; don't do it." 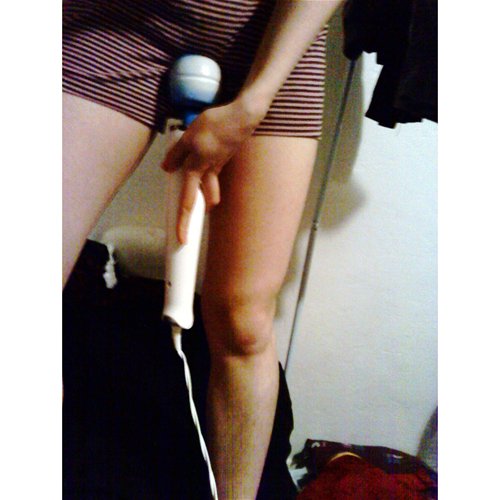 The head of the Hitachi (where you are probably going to be using most) is made of "hard plastic," although, when I press into, I feel as though, if I were to really dig my nails in, I could leave scratch marks that could potentially gather bacteria. Its texture reminds me of incredibly compact Styrofoam, both in feel and the fact that the head has micro-crevices similar to Styrofoam.

I think these crevices are worth note, as they may gather bacteria; the Hitachi head additionally has a line that bisects it, and crevice openings at the base of its head, where it would be removed to allow for attachments (many attachments are sold separately for the Hitachi).

Meanwhile, the handle of the Hitachi is made of smooth, hard plastic (a description which I agree with). It contains minimal crevices (two straight lines down its length, where I assume it was assembled, and its switch inset).

I have never had reason to believe that the handle would become unsafe to use, as it never encounters my vagina, I never touch my vagina then the handle, and it has remained in the same condition since purchase, but cleaning it with the same method (albeit, probably more care, as it contains more openings to its electronic innards).

The Hitachi is overall shaped like a microphone, with a circular head and long, almost-cylindrical handle.

Because the head is so large, as mentioned before, it can potentially touch areas where you did not mean for it to. For example, if you are trying to avoid touching the clit for a while, so as to avoid clit numbness, you should be careful that the head is not in fact still touching it or causing areas directly near it to vibrate, as those vibrations may contribute to said numbness. It may even be advisable to say that removing the head for a while, or using it against the thighs, may help, if you are trying to circulate where it touches.

Also, because it is so large, it is also very powerful. Its long handle allows for greater torque and thus force.

I have found that holding the Hitachi with both hands while applying it to my clit provides more pressure, and that gripping the Hitachi from the top of the handle does, as well. However, the higher up that I hold the Hitachi, the more likely it is that my hands become numb.

Yes! I said it. While the Hitachi has been commonly cited as a clit-number, I personally find that, when I am not careful, it is moreso my hands that are affected, as the Hitachi is so strong that it causes everything that it comes in contact with to feel the vibrations. Once, I was so lost in the experience that, as I was driving the Hitachi against me, I was simultaneously placing my hands in such a way that the Hitachi was uncomfortably against them, and a deep indent mark was left on my hands. I do not know how this happened, but after it did I became much more careful.

I have sometimes heard that it helps to wrap a blanket or towel around the Hitachi to lessen its vibrations. I have considered doing this to the handle, but have not done it yet because I worry about the Hitachi over-heating. I like using it for extended periods of time (probably 20 or more minutes). During that time it becomes very hot. Additionally, during winter I sometimes use it under the covers, causing it to become hotter even faster. Gripping the handle with both hands additionally increases heat. 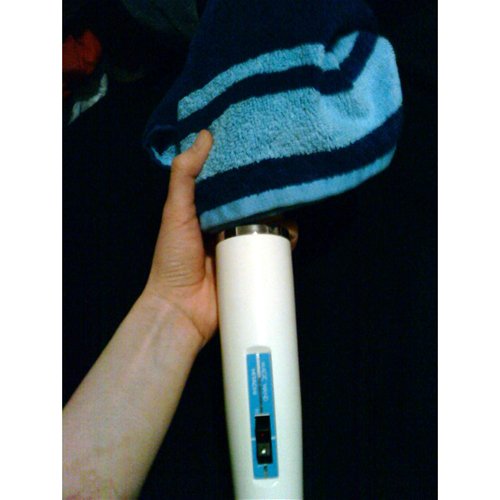 For the above problematic reasons, I think the Hitachi takes some level of skill or knowing of personal limits, in order to make the most of your experience with it.

The Hitachi allows for only two speeds: slow and fast, or, to me, too slow and too fast.

Fortunately, if you buy the speed control box, you can vary between the two speeds, creating the options of "slow while using slow mode," "fast on slow mode," "slow on fast," and "fast on fast," with spectrums of speed between each.

The slower the toy vibrates, the quieter it is, and vice versa.

The trouble is, even vibrating at its slowest speed, it is noisy. Whenever I use the Hitachi I turn the radio up way loud. Its sound reminds me of an electric razor.

While I have found its electrical cable (approximately 70 inches, or 178 cm) to be more than sufficient in length, I remember the first time I used the Hitachi with someone, the cable was not long enough. When the speed control box is used, an additional 73 inches (185 cm) are added.

One disadvantage of the Hitachi is that it requires connection to an outlet, but that could also be perceived as a plus, if you do not like using batteries. 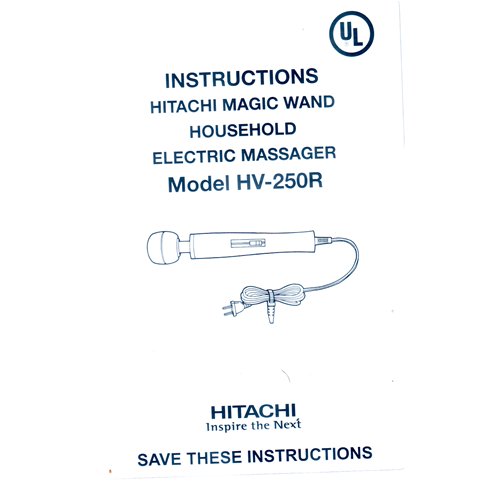 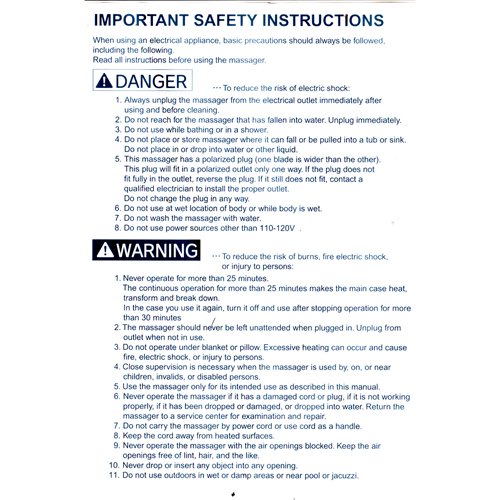 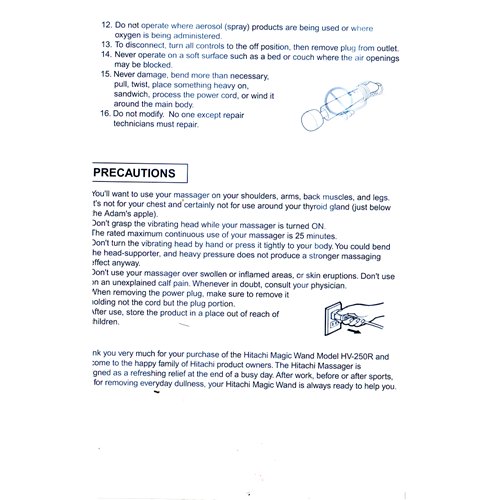 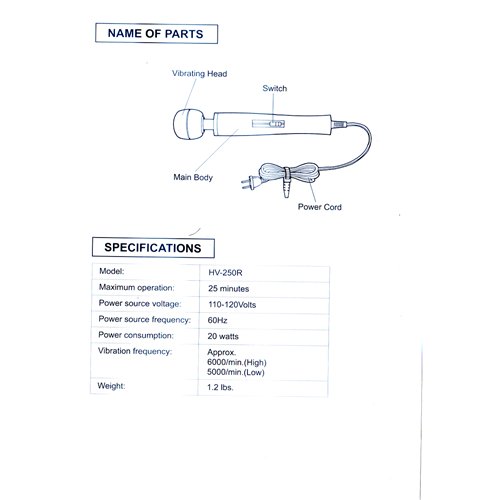 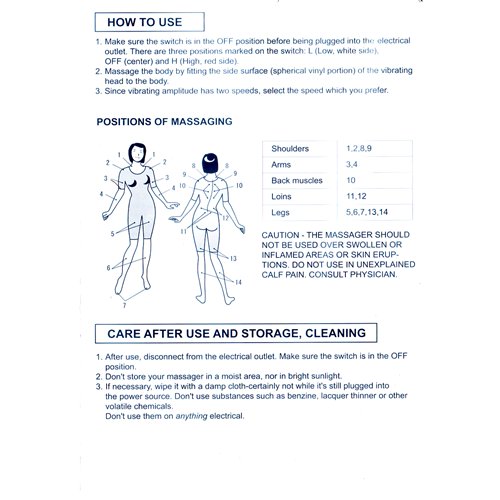 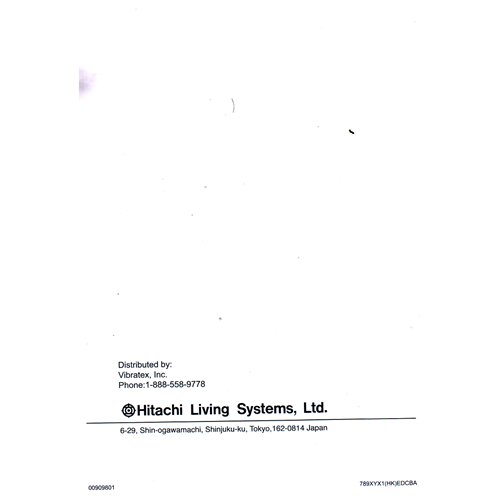 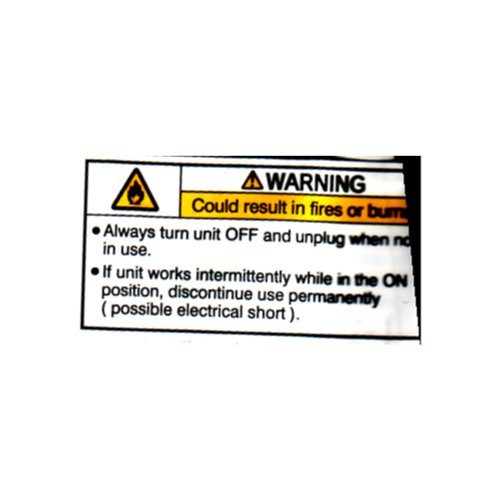 While the head should ideally be white, I feel as though, over time, my Hitachi head has become a slight brown. Often, I play with the Hitachi at night and am too tired and pleased to bother to clean it and wait until morning or, if I am too lazy, the next night, right before the next play session, to clean it.

Once I used the Hitachi with a condom over it and did not remove it until morning. It left an unattractive, slimy lubricated film over it (that was easily cleaned with Jo toy cleaner, but still; the Hitachi did not feel the same for at least a whole day after). 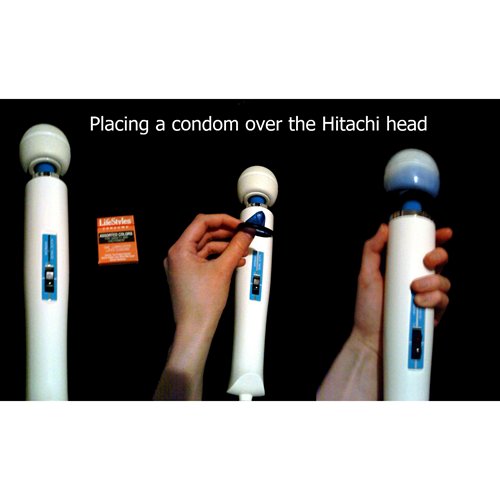 Also, because the toy is hard plastic, you may use any type of lube with it, but it is impossible to 100% sterilize. You cannot boil the plastic or apply bleach (it is porous and would absorb the bleach). Instead, you must settle for toy cleaner and, if you are careful, warm water; do not allow water to seep into its electronic components. I have noticed that any particular type of lube (oil, water, or silicone based) works better or worse than another while using the Hitachi.

The Hitachi comes in a long, skinny box that depicts the product and someone using the product over their clothed muscles.

It comes with minimal instructions, stating that the product should be used on sore muscles.

If you would like a good cover story as to why you have a Hitachi, you could simply say that you use it for sore muscles, and never need to hide it. You also could double its uses to ease sore muscles, also. Just be sure to clean your toy well, as always. While traveling with the Hitachi, I would recommend keeping it in its storage box, a sturdy box of some kind, or wrapped in many layers of towels or material. While I imagine that the Hitachi could last through much physically, it, like most things, might break if you did not treat it carefully enough, particularly around the head and "neck" (blue) area.

I would only be slightly okay with giving a box that once contained any type of vibrating object to someone, and might prefer painting over the box. Although, it is awkwardly long and skinny. I am not sure what could fit snugly inside of it, besides a Hitachi.

If you were not to paint over the box and wanted a cover up story, you could always say that you use the Hitachi over sore muscles, as the box in no way implies that the product can or should be used on genitals. 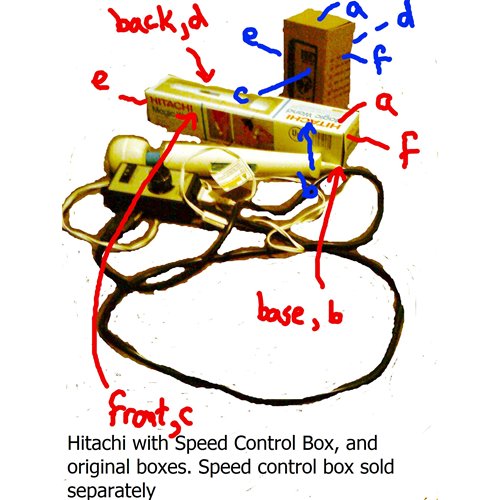 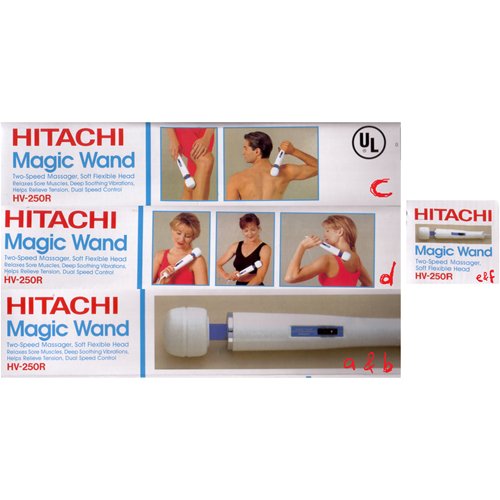 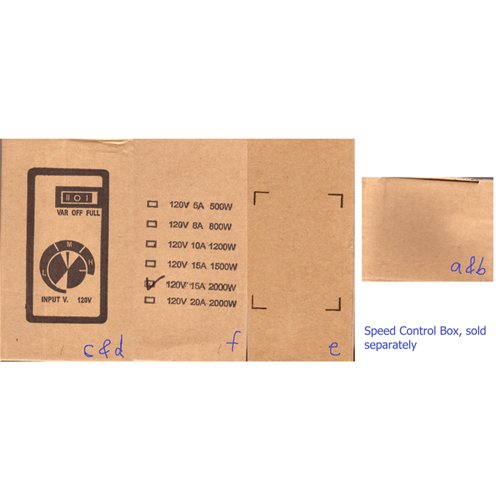 The Hitachi is most of my friends' favorite toy.

It is my favorite as well, but only when I use the speed control box. If I were not to have the control box, I may not like the Hitachi nearly as much.

Without the control box, toys that have even only four levels of slow speed out-rank the Hitachi, to me.

The Hitachi is either too fast or too slow. Because of that, I want to give it 3 stars. However, because it has the potential to vary in speed and, when it does vary in speed, it becomes my favorite toy, I give it a 4.

To use the speed control box, move the black switch from "Off" to either "Var" or "Full." On Var, the Hitachi may vary in speed, ranging from low, medium, and high on "slow," and low, medium, and high on "fast." (Slow and fast depicted as "high" and "low" on the Hitachi itself; I simply used different terms so as not to cause confusion.) Move the dial so that the white line indicator points to which speed you would like. 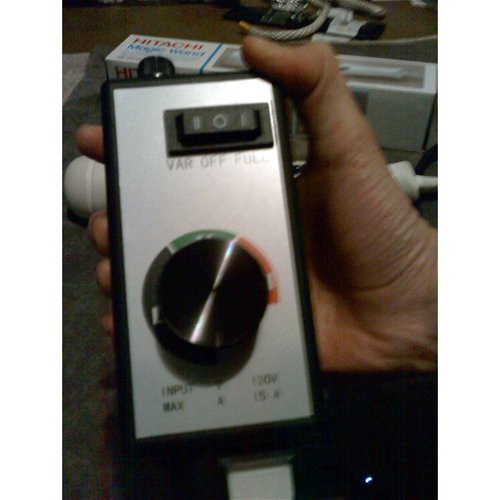 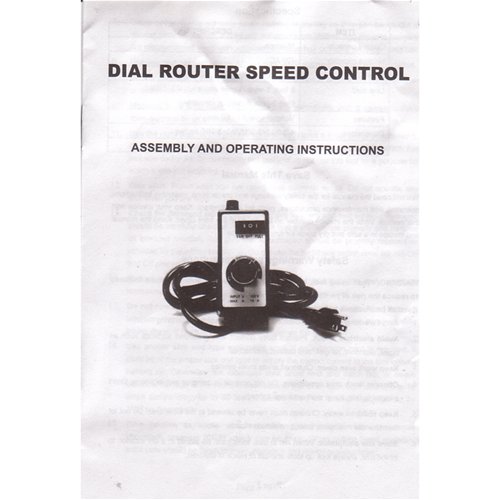 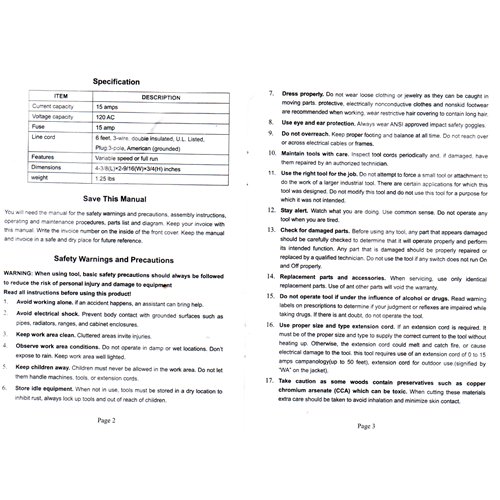 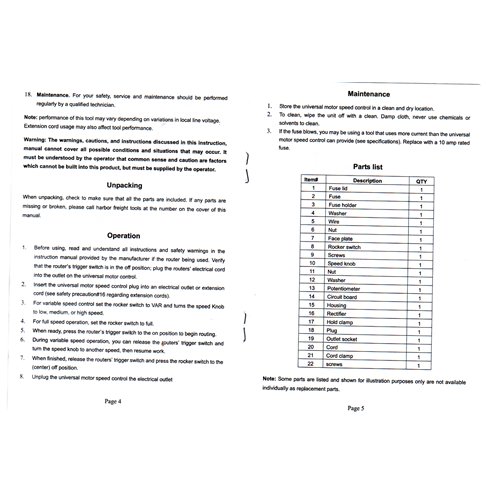 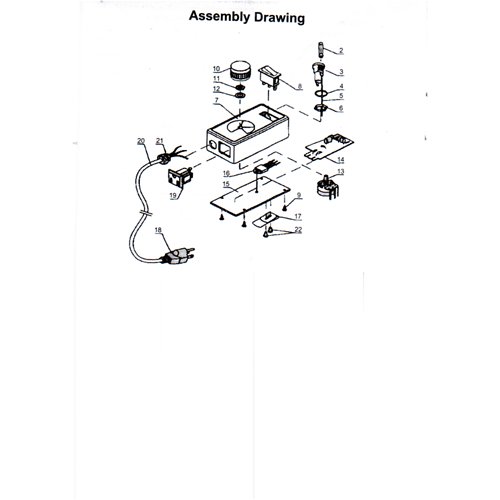 Being so popular, it is no surprise that many accessories are available for the Hitachi.

I have only ever tried the speed control box, though.

I have not tried one of the attachable heads, but would consider buying one because the Hitachi seems like a worthy investment. I have once heard that the Hitachi can last around twenty years (psh, I'm not hoping for that from mine based on the way that I've treated it, but I do expect it to have a good, long life).

I anticipate buying a second Hitachi and would be very disappointed if they were to one day disappear from the market. Although, because they are so popular, I really doubt this would happen, unless someone were to sue over numbness, or something. I would also be disappointed if the makers were to lower the Hitachi in speed; part of the reason that it is my favorite is I am someone who requires a lot of pressure in order to feel pleasure. I like the Hitachi's aggression, although I again acknowledge that it is immensely helpful to know your own personal limits as well as receive basic Hitachi advice, in order to make the most of your experience (for example, do not leave the Hitachi in one area for too long).

I have generally been fond of the Hitachi because many memories are associated with it. It seems omnipresent at play parties, was part of my first time having sex, and has never disappointed me since.

Off with their head silicone hitachi cap
$32.99

Smart Wand medium
$129.00
This content is the opinion of the submitting contributor and is not endorsed by EdenFantasys.com