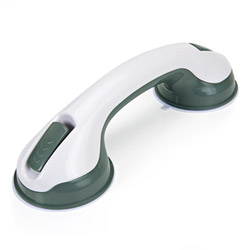 Other Sex in the Shower dual locking suction handle reviews

This handle does have a lot of potential, but you have to be willing to be a bit patient with it. If you can get it to sit correctly you'll have a handle that holds strong, even if it isn't going to hold all of your weight.
Pros:
Holds well in dry areas, Can support a decent amount of weight
Cons:
Slides in areas of shower that routinely get wet
Rating by reviewer:
4
extremely useful review
The box on this is as over the top as all the rest of the boxes in this line appear to be, with the naked couple simulating sex in what appears to be a very large shower. The front of the box shows them with the handle, the back shows them with this handle and the footrest. One side shows a closeup of the handle, the the other side has the instructions. The box also tells you that this should work on most smooth surfaces and tiles measuring at least 4" across.

Onto the handle itself. It's comically large. I literally laughed when I pulled it out of the box, because of how big it was. I have no idea what I was expecting it to look like, but this almost looked like a comical prop. Measuring end to end on the suction cup side, it's about 11 1/2" long. Each of the suction cups is about 4" across, and they stick out only just a bit from the plastic casing. The handle bells out above the suction cups to be about the same size, and then tapers back down to give you a handle with about 5" of gripping space on the underside. The top is of course longer, but you can only wrap so much around it.

Most of the handle is made of plastic. Pretty much everything except for the suction cups and a few other spring like pieces you can see under the cup and in the housing. If you decide you do want to clean this on occasion, you can wash it with warm soapy water, or use a bleach solution. Storage depends on where you end up using it. If you choose to leave it in the shower or elsewhere in the home, it can live comfortably wherever you stick it. Otherwise you can toss it in a drawer or in a cabinet to keep it out of the way.

So to get started you first find a clean, hard surface you want to stick the handle to. Then press the handle down and flip the little tabs from 'open' to 'closed' to secure it in place. If it's on tiles separated by grout, small overlaps aren't going to bother it, but it does need to be about 99.5% on the tile in order to get a good suction going. It also helps if it isn't anywhere in the shower that running water hits, since the only time it seemed to slide was when it was in the direct path of water. It did stick on my 4 1/4" shower tiles pretty well. In an area of the shower that didn't get hit by the water it stuck and held, even with tugging in all directions. It held very well on every window and mirror I tried as well. If your hardwood surfaces have a high gloss finish, it may stick there, but it won't stick to painted walls very well.

To remove it, simply flip the tabs from "closed" to "open" and remove. If you've left it in one spot for a long time, it may have started to stick very well and stay in place for a while. You can either use your fingernails to gently peel the cup back from the wall and break the suction, or there are small tabs that stick out of the cup that you can pull on to do the same thing.

Here's a picture of it in my shower next to my bottle of Shunga bodywash to try and emphasize scale a little bit.

Experience
I'm a little bit ehhh on this to be honest, at least I was at first. We don't have the privacy to have sex in the shower often enough to really make this a must have for us, but it does definitely come in handy when we are. Since it doesn't get used for sex all that often, I wanted to try and use it as something to grab onto when standing up after sitting down in the bathtub. Unfortunately to put it in a good spot for that, it's in the flow of water from the shower and just slides when I try to pull myself up. I have had decent luck with using it as a footrest to shave my legs though, so it does stay in the shower for that.
This content is the opinion of the submitting contributor and is not endorsed by EdenFantasys.com

Reviewed by Jul!a (Eden Writer) To the critics who despise us, go ahead and criticize us. It's your tyranny that drives us, adding fire to the flame.
Rank
7.5
wrote 560 reviews
Comments
Make a post
Forum
Thank you for viewing Sex in the Shower dual locking suction handle – position accessory review page!
Top