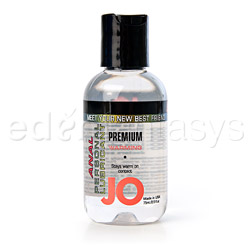 If you know you love warming lubricant, buy this lubricant immediately! It 100%, without a doubt works! It was extremely intense though, and after this we're actually not sure that warming lubricant is really our thing. It was definitely an interesting experience though, and the verdict is still out for me whether I love it or not.
Pros
definitely heats up!, hypo-allergenic, a little goes a long way as far as the warmth goes
Cons
felt like it caused more friction than lubrication, maybe a bit TOO intense for us!
Rating by reviewer:
3
extremely useful review
This was our first experience with a warming lubricant, and as such we didn't really know what to expect. We've tried tingling gels before that promise to cool, and never had much of an intense experience. We've also tried a cooling lubricant cream and I experienced significant cooling, but my husband didn't notice anything. I assumed that System Jo's Premium Warming Lubricant would have the same result. I was wrong. This lubricant is Hot! Hot! Hot! However, it turns out that I'm not sure that's a good thing, at least not for us.

The warming effect is almost immediate. You don't need to blow on it even, it just starts once it's applied. The first time I used it though I only used a few drops, I was a bit nervous and I wanted to take it slow. I didn't feel much that first time, just a gentle warmth. It really wasn't enough to even use for lubrication though, I had just added it for the warming experience alone that time.

The second time we used it we used it as an actual lubrication and I used about a nickel sized amount I'd say. I started off by applying some to my husband's cock as I do with all lubricants, and within seconds I was feeling the heat on my hand. I rubbed the excess on myself and already started to feel a gentle warmth. Once we began using this during sex (vaginal sex) my husband said "Is this supposed to be hot?" Woops, I guess I had forgotten to mention that it was a warming lube! So, I told him it was and asked if he could feel it, he said he definitely could. At this point I was still feeling it at a moderate intensity, it felt like the heat of our bodies but more intense. After a few minutes though it really started to heat up, and my husband said he felt like he was on fire. It was extremely hot, I wouldn't say it was entirely a burning feeling..just REALLY hot. The problem was that it felt like we were having more friction with the lube than we would have been without it, so it kind of defeated the purpose of lubrication. If we could have had more slip and slide action with the heat I think we would have enjoyed it a lot more.

The texture of the lubricant is pretty thick too (which is why it's marketed as an anal lubricant), so we were surprised that it felt like it was causing friction and not giving a truly lubricated feel. It's hard to even say how long it lasts because for us it never truly gave us a lubricated feel, and I used a decent amount. It was just the intense heat that took away from the lubricated feeling that we like. The heat comes from capsium (cayenne pepper) and peppermint, so you can understand how it's so hot! Because of the intense heat I have to say we did not even attempt this anally. I'm too much of a chicken to try it out there!

The rest of the ingredients are pretty typical silicone lubricant ingredients: Polydimethysiloxane,Decamethylcyclopentasiloxane,Octamethylcyclotetrasiloxane, Dimethylsiloxane, hydroxy-terminated and then the capsium and peppermint that I mentioned above. It's glycerin free, paraben free, and hypo-allergenic. It's also latex safe. Since it's a silicone lubricant it can be used in the shower too, and I imagine that this would make for some extremely hot and steamy shower sex!


The smell is a really nice peppermint scent, it's very invigorating and soothing all at the same time. This lubricant also makes an awesome warming massage lotion, and doesn't leave any kind of greasy feel on the skin, it just softens and smoothes and leaves it smelling pretty awesome. I want to mention though, the heating effect when using this on less sensitive skin the heating effect is very mild, nothing like how it is when it's actually used as a lubricant.
Experience
I get vaginal irritation somewhat often, I just have a very sensitive urinary tract and vaginal wall, and so I was afraid I'd end up with a burning sensation after using this lubricant. I did wash off the excess just to be safe, and I'm happy to say that I had no adverse reactions to the lubricant and there was not actual discomfort..just a very intense heat during sex. If you know you like warming lubricants I absolutely 100% recommend this lube, it definitely works! I think for us personally I will need to look for a milder warming lubricant. I was torn on if I liked it or not, but my husband said he definitely did not enjoy feeling like his cock was on fire. (Note: He did say it was NOT a burning sensation like a chemical burn, it was just crazy hot!)
This content is the opinion of the submitting contributor and is not endorsed by EdenFantasys.com