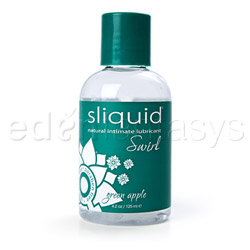 I wouldn't go so far to say this is "delicious", but it is tasty, and that's more than a lot of flavored lubes can say. Out of the ones I've tried, this is hands down the best on the market. I would recommend this to anyone, unless they have an allergy to one of the ingredients, which is unlikely given that there are so few of them and that they're all 100% vegan! I'll admit, I don't reach for this often, and I'm not happy about its viscosity, but I'm glad I have it.
Pros:
Tastes good, easily washes away, no glycerin
Cons:
A little too thin for me personally
Rating by reviewer:
4
No votes for this review
Sliquid never ceases to amaze me. Their old flavored line lacked glycerin but was still yummy, and I find glowing reviews of all their products everywhere I look. I'm not the biggest fan of flavored lubricants, but Sliquid Swirl may have convinced me. It does the job, and it does it well enough to have earned its spot in my toy box. This is probably the only apple-flavored lubricant I've ever tried that actually tastes good, like an apple candy (Jolly Rancher comparisons have been made more than once, and for good reason). The fact that this lube has zero glycerin in it is mind-blowing, as is the fact that it is 100% vegan, because it still manages to mimic the texture of a woman's natural fluids perfectly.

The label on the bottle is colored to match the lube's flavor, with strawberry being pink, green being apple, etc. The only image on the label is that of a big white flower graphic. The name of the product is written in small letters beneath the brand name, so someone would really have to inspect this in order to figure out what it is. It's fairly obvious what "intimate lubricant" is used for, but if the bottle is tucked away among your hair products or similar things, I doubt anyone would look twice. I have to commend Sliquid for this, as a lot of sex toys and lubes have packaging that you need to hide from company. At least you can be somewhat assured that this bottle will blend in with the stuff you already have on your bathroom counter.

The dispenser is in the cap - you have to push down on one side to expose the opening, and then tip and squeeze the bottle to get the product into your hand. It's like any shampoo or body wash you've ever used, and is not confusing at all. However, trying to close these types of caps after you've got lube all over your hand is annoying at best, and I really wish that it came with a lockable pump-top, instead.

The cap is snug right out of the box and I have not experienced any leaking whatsoever, despite storing this bottle on its side or sometimes even upside down (which, in general, I would not recommend, by the way!). I toss this bottle in my drawer after use instead of gently placing it in an upright position, and it hasn't exploded yet. That doesn't mean it never will, but for now I'm happy that this thing seems practically indestructible in comparison to many of my other lubricants.

The consistency? Pretty good. It's thin, which I'm not thrilled about, but it mimics a woman's natural fluids closely, so I guess I can't complain. It does not feel "unnatural" during use, if that makes sense. It does dry up a little sticky feeling, but I was able to remedy that with a wet wipe. This lube is water-based, so it's compatible with all your silicone toys - hell, all your toys, regardless of material - but it will quickly wash away in the shower, so be prepared to over-apply if you're using it in a wet environment.

They also specify that this lube is 100% vegan, so for all of you vegans out there in search of a flavored lube, I would give this one a try.

As for the flavor, it's actually not that bad. Like I said before, I don't expect much from flavored lubricants. In fact, I sometimes expect the worst. But the flavor here (I got this in green apple) tastes very similar to an apple Jolly Rancher candy, and I was happy to lap it up, whereas I'm usually the type to stay away from these kinds of things. I did not notice any irritation in my mouth OR my "parts" during or after use, and my partner reports that his penis is also fine, so I think we have a winner.
This content is the opinion of the submitting contributor and is not endorsed by EdenFantasys.com