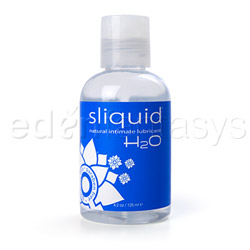 The most natural artificial lube ever!

This stuff is AWESOME. It feels, and acts, just like the natural body fluids, except maybe a little slicker. It mixes perfectly with natural body fluids so it feels like you could have made it yourself. It feels natural, does its' job perfectly, AND leaves me feeling as fresh as a ravished daisy. What more is there to ask?
Pros:
Natural ingredients, feels, acts, and preforms like the real deal. Water based.
Cons:
Nothing! It feels and acts natural, so unless you're a robot, there's nothing to worry about.
Rating by reviewer:
5
useful review
I LOVED this stuff. It isn't too think or thin, it feels natural, acts natural, and works wonderfully! Since it's water based, you can use it with just about anything. I loved how it felt natural, it even dries like the stuff "down yonder" produces on its own (note- I'm female.)

It warms quickly to body temperature, and feels like the real deal. It dries at a slightly slower rate than that of natural body fluids and the only noticeable difference is that Sliquid is a bit slicker, and depending on how hydrated you are, a bit thinner.

It dries the same way that natural body fluids would, forming a thin layer that flakes and is super easy and fast to simply brush off, though you most likely won't have that problem unless you use a ton and a half. Most of it is simple absorbed into the skin, which, if it has any effect, leaves the skin feeling a little bit more hydrated.

This was my first lube, and I've tried a few others since, including JO H2O, which was terrible in my opinion. It felt oily, seemed to never dry, left a weird greasy feeling on your skin that you could only get off with soap and water, and left weird sticky "stains" that looked wet until I washed them out, on my sheets. So gross!

Sliquid is NOTHING like that. I didn't have to do anything other than what I would if I hadn't used any lube. It worked the way lube SHOULD work, it only made things easier.

It isn't a discreet packaging, bit it isn't OBVIOUS either. It has the brand name and that it's water based in large letters, but it doesn't come out and say LUBE. So if you have kids, you may be able to get one over their heads if they spot it. My father's favorite? "That's to make you ask questions- and look! It worked!"

I didn't notice any smell, honestly, I didn't taste it (I got unscented/unflavored.) And don't use it in the shower, it just washes away, and when you're in the water, you don't really need lube anyways.

I don't plan on using any other brand lube. This stuff rocks.
Follow-up commentary   I still like it 12 months after original review
I still really like this product! I have the organic version now (I used all of my original bottle, and the organic was on sale). I would absolutely buy this again. The organic feels, acts, and smells exactly the same. It's just like the real (female) deal. It isn't gross, and it does the job. You don't need a ton of it, and it doesn't feel weird. I doubt I'll ever use a different brand, to be honest. I like that I can't tell what is lube and what is natural fluid. I've actually recommended this product (and moreover the brand) to a friend. I would recommend it to anybody, to be honest.

Some reviews may complain that it dries quickly or something, but I find that the dry time is just the same as female fluid, so it seems realistic to me.
This content is the opinion of the submitting contributor and is not endorsed by EdenFantasys.com

My H2O lube tags
About author