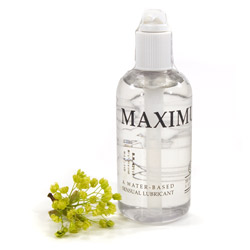 Maximus is one of the top water-based lubes for a reason: it's minimally irritating, maximally slick, stays where you need it, and it's easy to clean up.
Pros:
Stays slick and where it's put, minimal irritation, latex-safe, and generally fantastic
Cons:
Some people may find it a bit irritating and/or bitter.
Rating by reviewer:
5
useful review
Maximus receives much praise, simply because it is a product that deserves praise. Maximus is the only water-based lube I use because it's so good. While Maximus is often mentioned connected with anal activities, it's a great all around lube - and you can always thin it out with a few drops of water if you want something thinner, but we usually use it straight out of the bottle.

What is it about Maximus that is so compelling? It's a latex-safe, silicone-safe, water-based lube that's thick enough to stick around where you put it, almost anywhere you put it, even on silicone toys - upon which water-based lubes tend to bead up and run off (Maximus beads up a bit after a minute or two, but it still coats the toy). While Maximus is thick enough to stick around, you don't need to worry about it slowing down the action. It lets you move as fast as you want, while keeping things comfortably slick.

Speaking of the bottle, Maximus comes in a very nice and stable bottle. Body wise made a very good choice in the pump as well - it makes dispensing easy, and it is sized perfectly, rather than dispensing more than you need. I was a bit concerned at the apparently small size of Maximus (a bit over a cup), but Maximus is a quality lube and you don't need to use much of it - two weeks of use hasn't made much of a dent in my supply at all.

Not only does it stay where you want it, it stays slick for a long time, too. One and a half pumps kept my ass lubricated for over fifteen minutes without drying out (I wound up having to add a bit more after the lube had spread all around my butt and upper legs, but it was still slick). I wasn't as lucky using it for a long jack-off session, as the increased air exposure did cause it to dry out, but I was still happier with Maximus than with the other water-based lubes I've tried. The Maximus didn't get gummy as it dried and a drop of water immediately brought back the slickness with almost no delay. Another plus is becomes apparent afterward: once you're done and the lubricant dries out it isn't obnoxious and sticky. Maximus residue is no more bothersome than body fluids - while I can tell that there's a little something on my skin, I don't feel compelled to go wash it off. Once you go to wash up, Maximus is very obliging - run some water and your hands over your skin and it's gone (sadly, it washes away just as easily during use, so you're best off using something else for underwater activities).

Maximus, like all lubes, does have some downsides. I'm a bit sensitive to some of the chemicals used in water-based lubes, and while Maximus is the least irritating water-based lube I've come across, I do have a bit of discomfort for about a second or two after I put some Maximus in my ass. After that brief discomfort, it's smooth sailing, with no further problems.

Maximus also has an odd sweet-bitter flavor, and while it isn't overpowering we do avoid using Maximus until we're done with any oral activities. My suspicion that the bitterness is apparent to only certain people, similar to broccoli, so it might not be a problem for others.

While there are a few downsides, by far Maximus is the best water-based lube I've tried, bar none.
Follow-up commentary 4 months after original review
I used to adore Maximus, but unfortunately the parabens have finally caught up with me. The slight burning that I had when I wrote the original review has now increased to the point where straight Maximus is very uncomfortable, since it burns once it gets inside my anus. I wish that Bodywise would come out with a paraben-free Maximus, but until that day I think I might need to find a new water-based anal lube. It's still a great lube, just be careful if you're sensitive to parabens.
This product was provided at a discounted price in exchange for an unbiased review. This review is in compliance with the FTC guidelines.