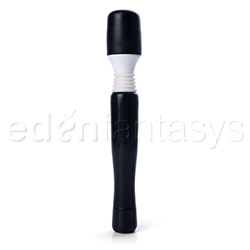 For the price, the quality of the Wanachi Mini is one of the best wand vibes around. It has quite a bit of power for it's size - it's compact, relatively quiet, and well designed. You won't be disappointed.
Pros
Compact and powerful; runs on 2 AA batteries, so a lot of play time; well designed
Cons
Battery powered, so less vibes than an electric wand.
Rating by reviewer:
5
useful review
Long ago, my girlfriend and I only had a few vibrators in our arsenal. Essentially, these consisted either of bullet vibes that would have only about 15 minutes worth of power – or oddly shaped dildo vibrators. These toys were pretty much useless in the bedroom.

So, while it doesn't have the power of a larger, electric powered wand vibe, the Wanachi Mini is a great place to start if you're interested in this kind of vibe. (We've since switched to a larger wand, but the Mini still has its place in our bedroom play).
This content is the opinion of the submitting contributor and is not endorsed by EdenFantasys.com

Become a Reviewer
My Wanachi mini tags
About author