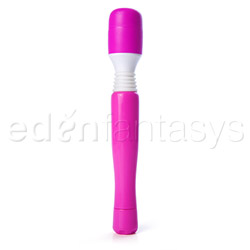 For the money, this is a great foot massager and is nice for a sensual massage. I don’t have much use for it as a sex toy because the flexible head makes it hard to apply pressure where I want it. Overall though, it’s not a bad toy to add to your collection, particularly if you are on the more sensitive side and don’t need as much power in tender places.
Pros:
Great foot/body massager, fairly powerful, waterproof.
Cons:
Flexible head reduces pressure, hard to keep on highest level.
Rating by reviewer:
3
extremely useful review
I’m a big fan of wand style vibrators, but I dislike having to plug them in and deal with the cord. So when I first saw this, I thought it would be awesome to have a powerful wand but in a smaller, battery operated form. I didn’t expect it to be as strong obviously, but I did hope it would be stronger than it turned out to be.

I actually bought this toy years ago from a different site (you know, back in the dark days before I knew Edenfantasys existed). I wish the site I had ordered from had offered the multiple color options that EF does. I don’t mind the purple color, but I would have preferred it in one of the other colors. I honestly don’t recall what the packaging was like as it’s been years.

At first, the Wanachi Mini seems like a good, solid toy. Unfortunately there are some flaws. I will say that for a vibe that runs on two AA batteries, it is fairly pleasingly powerful, particularly when the batteries are brand new. The flexible head is a nice idea, but in the end, it actually makes it hard to apply as much pressure as you might want, where you want it. For a while, I did use it quite a bit until the next thing came along. It’s still in my arsenal, and I pull it out from time to time.

It is easily operated with a dial on the base. Over all, it’s fairly quiet for the power which is always nice. The battery has an okay life span, but like so many toys operated by a dial on the base, it never seems to stay on the highest setting unless you hold it there.

It is waterproof. I don’t use it in the water often, but I have taken it in the bath and have never had a problem with water seeping into the battery compartment.

The body of the toy is plastic and the head is silicone so it’s compatible with your favorite water based lube only. It’s fairly easy to clean. I just make sure it’s closed tightly and clean it with warm water and antibacterial soap.

I do like that the wand shape doesn’t scream “SEX TOY." If you were to accidentally leave it out or if it was discovered, it would probably not be immediately recognizable as a toy but more as an average massager.
This content is the opinion of the submitting contributor and is not endorsed by EdenFantasys.com

My Wanachi mini tags
About author

Reviewed by CynicallyYours (Eden Advanced reviewer) "You don't suck (unless I tell you to), so I'm cynically yours"
Rank
5.7
wrote 55 reviews
This review was edited by
Comments
Make a post
Forum
No discussions yet.
Thank you for viewing Wanachi mini – sex toy review page!
Top