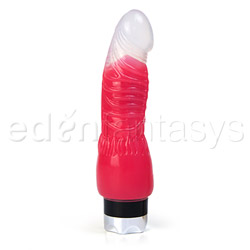 A Safer Version of an Old Standby

This is a good standby or regular use toy. It is relatively durable and extremely simple in terms of design. It won't blow your mind, but will get the job done without a doubt.
Pros
100% silicone, simple, cute, easy to use, and very quiet
Cons
Tacky to the touch and the buttons are on the bottom of the toy
Rating by reviewer:
3
extremely useful review

This is not a strange or exotic toy. It works vaginally and clitorally should you position it correctly.

This toy is waterproof, so you can use it in the shower should you prefer.

This toy is 100% silicone. As stated, it's very similar to many toys on the market, but has the look and feel of Jelly while being a much safer material.

It has a good amount of give but doesn't flop around. It is ribbed, but soft enough that the ribs are only somewhat noticeable.

It has no smell whatsoever, which is a huge plus.

As with a lot of silicone, it is a bit tacky, so it picks up lint and hair pretty easily.

A bit of squish. A bit of give and just enough resistance.

It is neon pink with a clearish end. It is realistically styled in that it somewhat resembles a circumcised penis. They weren't going for realism with this one, but it has exaggerated veins and a head. It flares out a bit towards the end of the insertable length.

The controls are at the bottom where you can’t see them while the toy is inside you. Not the best toy planning in the world but not uncommon. The bottom with the controls is a hard black and silver plastic.

As stated, the controls are on the base of the toy, on the bottom where you can't see if the toy is inserted. Bummer but I can work with that.

There are two buttons: One controls power and the other controls function.

The first setting is the strongest steady setting. This is something I have never experienced in a toy. Every other toy I have used starts out with its weakest setting and steadily increases. This is strange but, once again, the show and the orgasm must go on.

This toy is surprisingly quiet. It runs on 2 AA batteries and compared to similar toys it is much quieter.

Perhaps I just haven't noticed this in other toys, but when I turn the toy off and back on it returns to whichever setting you left it on, not back the the beginning of settings. This is neither a pro or a con, just something I noticed.

This toy is not porous, but because of the plastic pieces it can not be boiled out bleached, so care should be taken when sharing this toy (such as condom use).

Silicone toys should not touch each other for extended periods of time. The stronger silicone toy can break the other down. Additionally, silicone lube can NOT be used with this toy or any other silicone toys. It will ruin your toys. So. Don't. Do. It.

Baggies are really great for storing toys, but with silicone it can get frustrating to shove a tacky toy into a plastic bag. It just comes with the territory. The toys needs to be separated for storage, so baggies are a cheap and effective method.

This toy came in plastic packaging. It had one of those little "try me!' nipple-shaped thingies that is a sample of the silicone so if stocked in a store, the buyer could test out the feel of the material. The packaging describes its features, settings, and battery installation.
This product was provided free of charge to the reviewer. This review is in compliance with the FTC guidelines.