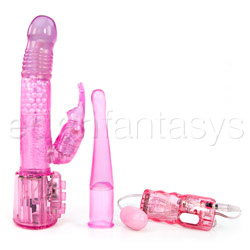 If you're looking for an inexpensive variety of toys to let you know which type you like better, give this one a try. It's inexpensive, and has enough function to it to let you know which types of toys you prefer. If you're looking for something that's going to actually last you for the long-haul, and will get you there every time, you may want to keep shopping.
Pros:
Inexpensive.
Great for beginners.
Cons:
Jelly.
No bullet in the head.
Battery usage.
Buzzy egg.
Rating by reviewer:
3
extremely useful review

Sadly, this toy is made out of jelly and plastic. The main parts of this toy are crafted out of a bubble-gum pink jelly, while the egg portion of the bullet, and the controller casings are made out of plastic. There is a wire that connects the bullet battery pack to the bullet.

The rabbit, as well as the probe, have a faint chemically smell to them, but a quick wash or two with soap and water should remove that quickly. As these toys are made out of jelly, I won't be putting them in my mouth, but I assume there'll be your standard jelly taste to it.

Due to the nature of these toys, as well as the numerous different places there are for bacteria to get trapped, I suggest that you use a condom if you plan on sharing these toys, as they'll never be fully sterilized.

In terms of the rabbit, the toy is actually somewhat larger than I would have expected it to be, although most of that is just being intimidated by the size of the controller pack at the base. At just over 10 inches in length it has about 6 inches of insertable length to it, with a 1.5 inches of diameter. It does have a beaded, as well as textured shaft, and the balls rotate the shaft a bit. The attached bunny that is on the shaft of the rabbit is nice and strong, albeit very buzzy. It's got a little bit of bend to it, but this toy is much more on the firm side than the flexible side. It's also not bendable, so if the shape of this toy doesn't work for you for g-spot stimulation, you're out of luck.

Both of these toys are designed more for beginners than advanced toy users, and while they are small enough to be travel-friendly, they are not at all discreet.

Starting first with the rabbit, the shaft doesn't have any vibrations, just the rotation of the shaft. This has only an "on" and "off" position, so there's no variation in how much rotation you're getting. The rabbit also has a separate controller, although the rabbit has "on" and "off", and a separate switch that is either "high" or "low". I don't find the difference between the two speeds to be very noticeable. The bullet for the vibrations is located within the rabbit itself, so you really aren't going to feel these vibrations internally at all, which is a bummer for me. I think this would have been a lot better feeling if it would have had a secondary bullet within the head somewhere in tandem with the rotations.

In terms of the bullet toy, there are only two speeds with this, "high" and "low". There's a light that corresponds with which one you're using, the light being dim on low, and brighter on high. I think this light, however, is superfluous seeing as how the toy is obscenely loud while on high. It's not too bad on low, but even with a door shut, muffled with covers, it's still able to be heard outside the door. It's very strong on the high function, but it also easily numbs my fingertips and my lady bits while on high. The low function, sadly, isn't enough to get me anywhere.

As this toy is jelly, you're going to want to make sure you sterilize it after each use, so that you aren't getting germ funk caked inside the little crevices. Make sure to take especially good care on the ridges around the head, the texture around the rabbit, and any creases near the casing. This toy is also a lint magnet, so you'll probably want to wipe it down before use, as well. In the event that you share this toy, make sure you use a condom, because even with soap and water, antibacterial soap, or a toy cleaner, you will not get all the germs off. This toy is safe to be used with all lubrication and is compatible with other toys.

This toy had very minimal packaging, and simply came in a plastic package with the name "orgasmic foreplay kit" on the outside. There were no directions, photos, or anything else. In fairness, this toy is not exactly overly complicated and if you need directions to figure out how to be using it, you probably shouldn't be using it.

I've been eyeing rabbits for a long time and always seem to pass on them because they always look really cheap. When this was a freebie in my order, I was pleased, because I got to test out the mechanics of a rabbit toy without spending anything on it, in the event it didn't at all work for my body. Most toys that are specific to g-spot stimulation are ineffective with my anatomy, and just don't ever actually hit my g-spot. I was pleasantly surprised that while this toy didn't exactly "hit my g-spot" in terms of what I'm used to, the rotations in this toy were enjoyable. I would have liked it more if it had actual vibrations within the head, as well, but even with just this layout, I managed to achieve an orgasm.

While this toy is certainly not going to be my "go-to" toy, it was enough to let me know that I do like rabbits, and that I should find one that works for me, and invest in one.
This content is the opinion of the submitting contributor and is not endorsed by EdenFantasys.com