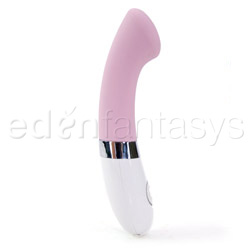 It's an amazing toy, and it really does take female bodies and anatomy into account. When they say "meant for the g-spot", they mean it. I have never felt anything like this in my entire life!
Rating by reviewer:
5
useful review
I was so unbelievably excited about the Gigi g-spot vibrator by Lelo. First of all, it was the most expensive sex toy of any kind that I'd ever set my hands upon. Secondly, Gigi was rechargeable - kudos to Lelo for being environmentally friendly! Plus, it was purple (ok, so it comes in pink too, but at least you have an OPTION) and white, and just looked cool and modern. I simply wanted it. I was waiting on pins and needles until I got to try this toy out!

Finally, it arrived, and let me say, the packaging is exquisite. It comes in a travel box that holds the charger and the toy, but for little forays they provide a satin travel bag. Talk about snazzy! I plugged my Gigi in to charge, eager to try it, but determined to wait for my partner to bust out the big guns. Once the light (oh yes, it has a light) showed that it was charged, it was off to my partner's to give this toy a run for its money.

Ok. So there are some REALLY big positives about the toy, and a few negatives. For the sake of keeping your attention, I'm going with the pluses before the minuses. It feels lovely - just holding it in your hands, the silicone feels almost like velvet. I have no qualms with putting velvet in my cunt...in fact, I support it. A lot. The toy looks classy, and I would be ok showing it to anyone, even my family, that's how nice it is. I showed it to my partner, and after some warm up we experimented turning it on and off, upping the vibration, changing the programs, and so on. We were ready. I sat back, and let my partner and the Gigi work their magic.

I then tried using it as one of clitoral stimulators with my partner penetrating me, and by golly, that was amazing too. As far as types of vibration, Gigi delivered. It was the gift that kept on giving. I was having the time of my life...all in the name of testing it out for this review, of course.

Enough of the good bits. Nothing is perfect, and this toy wasn't either. The biggest issue both my partner and I had was the handle. It's dainty and classic and all that, but poorly designed. Regardless of who is using it and from what angle, someone's fingers are going to be on the buttons, and let me tell you, there is nothing more frustrating when on the precipice of an orgasm than going from VROOOOOOOOM to vroom, or a solid buzzing to vroom, pause, vroom, pause, vroom. While all the programs and levels were great, both my partner and I kept hitting the buttons and accidentally changing them at the worst moments. That was incredibly frustrating, as it took forever to keep pausing, removing it, putting it back on the setting I wanted, and then going at it again. The handle is also smooth, and does not have a good grip, making it harder to use in a speedy and aggressive manner (which, if you try this toy, is exactly how you'll want it as you sail off into the sea of climax) with out it slipping, or changing the settings.

The Gigi g-spot vibrator by Lelo is an amazing sex toy, and it really does take female bodies and anatomy into account. I had high expectations because of the hype and the price, and most were met. However, the accidental button pressing was really annoying, as was the handle slippage. I'd be more inclined to use it with a partner (having someone fuck me with this opened new doors into the world of my G-spot), but it also was great alone, both internally and clitorally. If you're looking for a top of the line vibe, and don't mind a little trial and error with the buttons and the handle, then I'd highly recommend it.
This product was provided free of charge to the reviewer. This review is in compliance with the FTC guidelines.