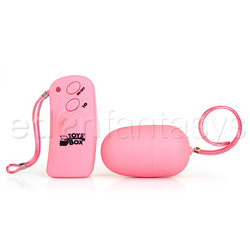 It's a good time to go vegan!

If you are looking for a wireless egg then turn the other way. This is not for you. From the poor quality, to the battery-guzzling buzzy vibrations, this toy will definitely turn you off!
Pros:
- Remote control
Cons:
- Poor quality
- Battery guzzler
- Weak, buzzy vibrations
Rating by reviewer:
1
extremely useful review

This toy is mainly used on the clitoris but can also be inserted vaginally. It can also stimulate nipples, testicles, perineum, the shaft of the penis, or anywhere else you'd like to have a little buzz on. It shouldn't be used anally because of the lack of a flared base.

The egg comes with a wireless remote which will make your solo session more pleasurable since you don't need to look at the egg to change functions. It is small enough to fit between a couple during intercourse.

This egg is totally waterproof so you can take it in shower or the bath with you.

The egg and remote control are made of plastic which is an 8 on Eden's safety scale. This material is non-porous and phthalate-free.

It has a faint plastic smell and no taste. It is smooth and velvety to the touch. There is a seam in the middle of the egg that can be felt during use. Because the egg is plastic, it has no give to it; it is very rigid.

The egg and remote control have plastic strings attached to them. A metal clamp pinches two ends of the string to create a loop to avoid losing the egg during use.

Anyone can use this toy; it's not intimidating for beginners but advanced users might find it lacking.

This toy is not very discreet in design, if people look at it, they would be able to tell what it is. The egg and remote are small enough to store in any place. Since it is so small, it is easy to travel with. The exception is that the remote buttons can be easily pushed during travel. It would be easier to store the batteries separately from the egg and remote.

This egg is advertised as having 10 functions but I only count 7:

On the highest setting, you can hear the toy underneath the covers, but not through a door, so you might want to be alone when you get busy.

The vibrations are very buzzy. Once you get to the highest speed, you cannot feel the vibrations on you. I don't find any of the vibrations pleasurable nor did my girlfriend because of the buzziness.

We did not attempt to insert it vaginally because of the seem on the egg. Also, the metal clamp that makes the loop is very rough and appears to be extremely uncomfortable. Although, you can remove this clamp which would result in getting rid of the loop and have one long string to hold on to.

You twist the part of the egg without the string counterclockwise to expose the battery compartment. Inside, there are two open spaces for LR1 batteries. It is clearly indicated the "+" and "-" signs to insert the batteries.

On the back of the remote, there is a battery cover that slides down to expose the battery compartment. Again, the "+" and "-" signs are clearly indicated to insert the 4xLR44 batteries.

The egg can easily be washed with soap and water. You can also use a 10% bleach solution or toy cleaner. Since it is waterproof you can clean it under running water without worry. Even if it is waterproof, you shouldn't boil it because it is a motorized toy. Since it can not be completely sanitized, you should cover it with a condom or toy cover if sharing.

Since the egg is plastic you can use any type of lubes with it: oil, silicone or water-based.

You can store the egg in a pouch, drawer or in the packaging that it comes in. You don't have to worry about storing it around other toys, plastic; silicone, metal and more! Since the egg is not attached to its remote control, make sure to store it together so you don't lose it! You can tie the egg and the remote together with the already attached strings on them. If you're not using the egg very often, you should try and take the batteries out when storing to avoid draining them.

The egg comes in a little pink and white cardboard box. There are two window cut outs in the front of the box, one for the egg and the other for remote control. Though there are no nude pictures on the box, the packaging is not discreet. On the front, it says: "Wireless Remote Control Bullet", in capital bold letters. It also says: "Quality sex toys guarantee". The top of the box says: "Sex Toys Bring More Erotic Pleasure To The World!, Enjoy your happy life everyday!", in bold letters. It also mentions that the egg is waterproof, wireless and has 10 functions.

There are no instructions inside the box but on the back of it they list a few directions. They do not mention how to use the egg, only that you require 4 LR44 batteries for the remote control and 2 LR1 batteries for the egg. These batteries are included in the box. There are directions on how to wash the egg and a few tips to avoid injury.

You can easily open the box by lifting the top flap. Inside there is a white plastic insert molded perfectly to fit the egg, remote control and batteries. The LR44 batteries are easily removed but the LR1 batteries, you must push on the white plastic mold from behind to get them out.

The egg does not come with a pouch for storage. The box is small enough that you can use it for storage. If you do not wish to use the box to store your egg in, the packaging can be recycled.

This toy is definitely not a toy that I would like to keep in my inventory.

I wanted to mention the battery life in my experience section because I did not get the chance to even know how long they last. This toy was so poorly made that it broke within the first 15 minutes of use.

The seam on the egg where it opens up to insert the batteries is uneven. On one side of the egg it seems flush, but on the other there is an evident lip.

The wireless remote only works no further than max 2 feet from the egg. Also, it does not work through your hand further than 1/2'.

The higher intensity grew in pitch. Also they were so buzzy that you couldn't feel them anymore. For people that like pressure this is not the toy for you. When you apply pressure, the vibrations are muffled so much that they can no be felt anymore.

7 function wireless remote egg
$49.99
This content is the opinion of the submitting contributor and is not endorsed by EdenFantasys.com