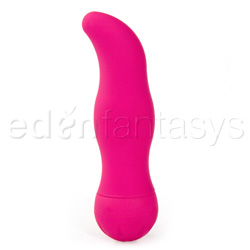 After buying this vibrator, I do not feel the need to buy another one (at least not at this point) because I really do enjoy it. It is a pretty basic toy without a lot of bells and whistles as some of the other vibrators out there but you could classify this toy as a kind of "work horse" if you will; it will certainly get the job done.
Pros:
Small, easy to clean, waterproof
Cons:
Speed dial can be hard to change while in use.
Rating by reviewer:
4
useful review
Although I only have two vibrators, I do not feel like I need any more because this one truly meets all my needs. The selling point for me regarding this toy was its size, I really like that it is big enough to get the job done, but small enough to be hidden or discreet during travel. I was also interested in trying out a g-spot stimulator since I did not have any toys that met that description at the time.

I bought this toy while I was in college, so I did want it to be quiet, but knowing that I probably would not use it frequently, so it did not need to be silent. I did want the toy to be made of a safer material than my first vibrator purchase (jelly), but again, I was in college so I was not willing to splurge on a toy.
I could not have been more satisfied with this toy; it was exactly what I had expected. I was surprised at the texture of the toy; although it is plastic, it seems almost velvety, not at all slick or slippery.