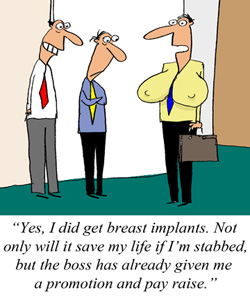 See? They really are very safe ...
Breast implants have a lot of uses. They make some women feel better about their appearance, entice and excite some men and now they could well be considered personal protection. A Russian woman’s “huge” breast implant is credited with saving her life.

The 40 year-old woman had gotten in a fight with her husband, Pravda reports, and he attempted to stab her in the heart but was thwarted when the knife stuck in a “huge” silicone breast implant. The Moscow woman would have died had the implant not been there, the paper said, and called the implant “body armor.”

“The medics used state-of-the-art implants filled with gel-like silicon. The content of the implant did not leak, and the breast preserved its shape,” the paper reported.

Interestingly, it was the husband who wanted her to get her breasts embiggened in the first place, which she happily did five years ago.

Kind of remarkable that they didn’t even spring a leak. Still, she went ahead and got herself a new one. How long do you think before she does the same thing with the husband?
Tags:
Views: 2027