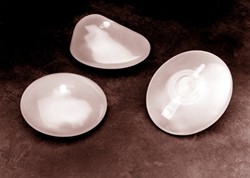 Women think of breast cancer as the sole boogey man lurking under our breastbones, but jet fuel in boobie juice and toddlers developing buds make it pretty obvious: the environmental impact on mammillary health is double-D huge.
That is one conclusion in Florence William’s new book about breasts - Breasts: A Natural and Unnatural History (2012) - an ode to those beguiling curves we have much to learn about. "For such an enormously popular feature of the human race -- even today, when they are frequently bikinied, bared, flaunted, measured, inflated, sexted, YouTubed, suckled, pierced, tattooed, tassled and in every way fetishized -- it’s remarkable how little we know about their basic biology,” writes Williams.

Being made primarily of fat and glandular tissue, “breasts, it turns out, are a particularly fine mirror of our industrial lives,” she explains. “In the course of a lifetime, [they] meet many friends and foes: lovers, babies, ill-fitting undergarments, persistent pollutants, maybe a nipple ring, a baggie of silicone or a dose of therapeutic radiation. It’s a lot to ask of breasts.”

Measurable consequences include bigger breasts developed earlier with toxins finding secret hiding places in many unsuspecting bosoms. A cluster of service-MEN developing breast cancer from contaminated ground water near their base. Toddler girls sprouting breast buds as early as age two from exposure to estrogen mimicking compounds in their food and/or water.

We often think of the toxic culprits coming from industrial sources. Air pollution is a biggie, and as Williams found out, can show up in breast milk samples. There are more than 85,000 different chemicals in use in the USA, and only about 5% have been tested for reproductive toxicity, states the American Fertility Association (AFA), a non-profit group that researches and educates on reproductive issues.

Many of those are in our beauty, cleaning and pleasure aid products. We are primping, polishing and getting dirty (good) in contaminated (bad) ways. The AFA provides excellent materials free for those who want to learn more. For example, lead in lipsticks reduces fertility in men and women. Toluene in nail polish and hair dye stops menstruation and decreases sperm count. Pthalates are reproductive toxins found in fragrances, cosmetics, personal care products, vibrators and dildos. Bisphenol-A in plastics has been shown to cause spontaneous abortions and make spunky funk out of a man’s sperm. This is just an itty bitty list of chemicals getting in the way of our chemistry.

Sometimes the problem even stems from a trusted source, like the Susan G. Komen Foundation. Yeah, the very one. Their signature scent could have been renamed ‘poisonous promises’ instead of ‘promise me’ after Breast Cancer Action’s independent tests found that Komen’s signature fragrance contained ‘toxic and hazardous’ ingredients not listed on the label. The same chemicals were culprits identified as carcinogenic. Some sick irony, eh?

Just to be fair, ‘Promise Me’ isn’t the only scent accused of having a stinky formulation; most perfumes have proprietary compound lists that can include nasty and often carcinogenic agents. It is all kept hush-hush because who in their right mind wants to smell like Bergamot, rosewood, musk and other heady notes mixed with the neurotoxins and hormone disruptors, or think their curves are dangerous in a noxious way?

Green Before You Pink

That Susan G. Komen’s fragrance ‘Promise Me’ may have be laced with cancer-causing ingredients doesn’t mean we can’t do our own due diligence. According to the AFA, 7.3 million American women have reproductive health problems. Knowledge of “environmental toxins can help stack the odds in your favor,” they write. In time, I predict that we’ll incontrovertibly know the truth about what the harmful toxins in our private bits are causing.

You want healthier breasts, sex that is optimally pleasurable, fertility unburdened by modern toxins, restorative sleep, clearer skin, stronger erections and the like? If the answer to any of these questions is a remote yes, then transform your private life to reflect sustainable living. Become a wiser, eco-sexually savvy consumer, and be part of the paradigm that promotes a world in which a green lens determines our ideals of beauty and health from the crowns of our heads past our natural bust lines down to our toes.

We want to hear from you!

Yes, that’s right. We want YOU to write something for SexIs! See this post for details!
Tags:
Views: 2469
Related articles