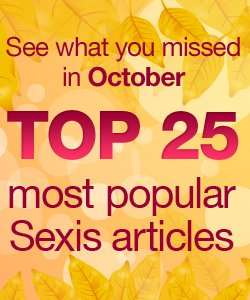 October was boob month. Breast Cancer Awareness Month sparked somber inspiration for many of our writers and columnists and the subject was clearly on the minds of many of our readers. Still, we tried to approach the topic as a celebration of not only surviving the disease but of breasts themselves.
We love breasts. The Bloggess had fun with naming them, Midori wrote a letter to hers, Tinamarie Bernard explored their sacred and not-so-sacred place in our culture while Cherry Trifle asked the question “If your boobs could talk, what would they say?”

Of course, there was plenty of advice, humor, Halloween fun and even some career advice. Catch up on the rest of our top stories for the month of October below!
1. A Boob By Any Other Name... by The Bloggess
When The Bloggess first noticed that #NicknamesForBreasts was trending on Twitter, she shuddered at the horror no doubt looming before her, and yes, some of the nicknames were misogynistic and demeaning, but most were sort of awesome, many were written by women themselves. Let’s explore, shall we?

3. Breast Cancer and Polyamory: A Story of Non-monogamy, Love and Commitment While Going Through Chemo by Rachel White
Allena Gabosch is the founder of Seattle’s Center for Sex Positivity, a polyamorous, sex-scene goddess and a reminder that even goddesses are not immune to the specter of breast cancer.

5. The Scar Project by Liz Langley
David Jay, a fashion photographer by trade, began taking pictures of breast cancer survivors, their nude or semi-nude bodies, their scars, their truth. The resulting photos are breath taking in their honesty, a reminder that we might be culturally more aware of breast cancer than ever but many of us have never really seen it — and breast cancer is not a pink ribbon.

6. Colonization of the Sacred Breast by Tinamarie Bernard
The powerful meanings breasts convey as life-givers and life-destroyers are varied and complex. There are the ‘good breasts’ that we associate with lactating mothers and the ‘bad breasts’ that kill us with cancer; in between we squeeze in the ‘naughty breasts’ of sexuality that, depending on perspective, can be bad, good or both.

7. SexCult: Spectrophilia by Liz Langley
Halloween is without question the best of all possible holidays…there’s no family BS, no gift guilt, just tricks, treats and terror. But let’s face it…trying to squeeze something sexy out of it is like trying to take candy from Rosemary’s Baby.

8. When Testosterone Sabotages A Man’s Sex Life by Tinamarie Bernard
If you were to distribute a tablespoon of testosterone to a lecture hall full of young men, you’d have yourself a gang of lunatics chasing and humping everything that moves, my professor said. From that day forward, sex hormones had my full appreciation.

9. Dear Boobies, by Midori
Dear Boobies, It probably doesn’t seem like it, but I really do love the two of you. I’m so grateful that you’ve not withered away from the abject neglect and borderline abuse I’ve put you through. If you were my children, social services would be knocking on my door to take you away from me…

13. SexCult: Is He an Addict or Isn't He? by Liz Langley
Dr. Drew's Celebrity Sex Rehab has brought focus to sex as an addiction, an idea with which many disagree, including some of his former celebrity patients.

14. Scary Monsters You’d Super Freak by Cherry Trifle
Cherry loves Halloween, loves horror films and loves monsters (maybe a little too much). She’s chosen ten classic movie monsters that she finds oddly attracted to… what about you, which movie monsters make you hot?

15. I Hate Dating, I Like Relationships by Rachel Kramer Bussel
“Dating” sounds like a dirty word to Rachel, and not in a good way. She loves traditionally dirty words in the right context, but dating? Not so much…here’s why.

16. Mr. Sexsmith Says: If You’re a Bottom, Own It by Sinclair Sexsmith
Mary's struggling with the gender roles and sexual top and bottom roles within her relationship and getting her partner to fill the role of top is proving to be a challenge.

17. SexBeat: Has Lady Gaga Made Drag Kings Mainstream? by Rachel White
The Queen of Pop became the King of Drag on stage (and off) at the recent MTV's VMA 2011, performing as her alter ego, Jo Calderone, and opened up the world of drag kings for a peek from millions of mainstream Americans. Has she done for women in drag what RuPaul did for men in dresses?

18. Mr. Sexsmith Says: From One Butch Top To Another, Here’s How To Get Off More Easily by Sinclair Sexsmith
Dear Mr. Sexsmith,
I am a butch top, but I have started dating an aggressive femme, who is used to topping as well. I have converted her to a bottom and she loves it, but she still wants to touch me and I’m ok with that. Problem is, I am very tough to get off.

19. Tuesdays With Nina: How To Roleplay With A Straight Face by Nina Hartley
The Naughty Nurse, the Sassy Schoolgirl, The Prison Guard, The Perverted Professor...most of us have a role that really gets us hot, but how do you get into character and get comfortable with the scene that your partner is into, but you find makes you feel ridiculous?

20. Sex and Pregnancy: The First Trimester by Lady J
It's possible there are as many myths and misconceptions about sex and pregnancy as there are babies being born. So what's fact and what's fiction? In this three-part series, Lady J, as a part of her own pregnancy journey, takes us through sex and pregnancy, one trimester at a time.

21. Devil's Advocate: Can Feminists Ditch the Misogyny? by Roland Hulme
Reports suggest human breast milk can combat more than 40 types of cancer — with safer and more reliable results than anything with a FDA approval label stamped on it. Despite milk clearly “doing the body good” are we as a society too hung up to take advantage?

23. Nikol Hasler: Sex, Drugs, & Rock N Roll: Boyfriend Material?
Nikol dates a lot of musicians. And by date, it usually goes like, "Hey, I like your style. Wanna go out?" They then got to a handful of shows and parties at which she’s one of the oldest women there, they get crazy drunk, they have sex, then they become friends. That's because she has trouble finding a way to be the kind of girlfriend a musician needs.

24. Sex While Skydiving Totally Worth Getting Fired For by Liz Langley
Well, we think so, anyway. Maybe there's a new career in it?

25. Great Sex Can Make You Forget Everything. Literally. by Rayne Millaray
This hasn't happened to us and we're not sure we'd mind. You?

Bonus: I, Boobie by Cherry Trifle
If your breasts could talk, what would they say?
Tags:
Views: 1523
Related articles