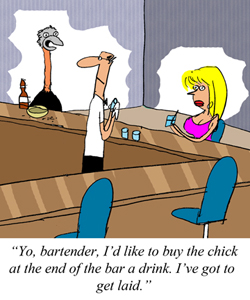 They will be if the ostriches have their way!
It’s always awkward when someone tries to strike up an inter-office romance. It’s way more awkward when they try to strike up an inter-species romance. Especially when they’re around seven feet tall, their face looks like a weapon and one of their eggs could satisfy everyone you’re having over for brunch.

Yep. Ostriches, it turns out, are attracted to humans.

Scicurious at Neurotic Physiology reported on Friday about an experiment done on an ostrich farms where, it should be noted, ostrich eggs are scooped up by the farmers as soon as they appear and the progeny raised by humans. Farmers were noticing that the ostriches did a courtship dance quite a bit more frequently when their humans were nearby.

The method of scientific inquiry in this case was pretty much to spy on the ostriches. The scientists observed them while they themselves were unobserved and had other humans walk by their enclosures. Sometimes the humans kept their distance, and sometimes they got right up close.

The result was “both female AND male ostriches solicited sex more than twice as often when the humans were nearby. Seventy percent of the ostriches reliably hit on the humans when they were around. Turns out that being raised by humans can change what an ostrich is attracted to.” Only the control ostrich, which was raised in Africa and brought to the farm later, ignored the humans altogether.

So long as the ostriches don't start texting their humans too much, and leaving suggestive remarks on their Facebook pages, it’s probably not a worry. Unless the humans start looking longingly back.
Tags:
Views: 1382
Related articles