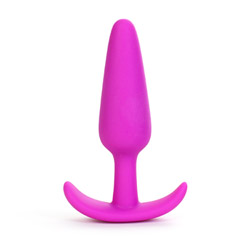 This plug is best for intermediate to advanced users, as it is quite large. That being said, it's also quite flexible, which makes for easier insertion than a completely rigid toy. I found it to be an ideal plug to use for long sessions and for long-term wear. The base comfortably contours to the curves of your body, making it comfortable to sit and move around with it in.

Because this is a silicone toy, it can be shared between multiple partners once it has been properly disinfected.

This toy is made out of a velvety silicone. I noticed no smell out of the package, and it is also tasteless. The toy is texture-less, which allows for easy insertion. However, the silicone has a bit of drag, so it's best used with lube.

The head of the plug is rigid with just a slight amount of give. The stem and base are both fairly flexible, however.

The plug itself has a pretty standard shape; thinner at the top and larger at the bottom. I have had no issues with this toy slipping out, even during rigorous activity. The stem is a little long, but I had no issues with it sticking out too far. The widest part of this toy has a 4 1/2" inch diameter, and the insertable portion is 4 1/2" long. So, this plug is too large for beginners.

What is unusual about this toy is the base. One side is bigger than the other, and the thinner side has a "lip." I believe that it's supposed to be worn with the larger side being worn towards the front, though the thinner side worn towards the front can dip into the vagina for just a touch of added stimulation. However, if this toy is being used for double anal-and-vaginal penetration, I recommend wearing it with the larger side towards the front. I didn't immediately realize the difference, and it lead to some discomfort until the plug was taken out and turned around.

While there isn't a seam on the plug, I did notice it on the base. It wasn't sharp enough to be uncomfortable, but if you're sensitive it may be an issue. The Doc Johnson logo is printed in raised lettering on the bottom of the base.

The large size is a little intimidating, but it slides in easily and comfortably. The curved base and flexible stem of the toy made it incredibly comfortable to wear underneath clothes. There's a little bit of a "learning curve" because of the unusual base. Once we figured out how to use it, there was no issue.

The plug can be washed with warm water and antibacterial soap. To disinfect it, it can be placed in a pot of boiling water. This plug can be shared between partners as long as it's been disinfected.

Because it is silicone, it should not be used with a silicone-based lubricant.

It can be easily stored, though it should not be stored alongside other silicone toys, as the material will deteriorate. I keep mine in its original packaging.

The toy is packaged in a plastic shell and is visible from the front of the box, which also explicitly states that this product is a plug. It's not discreet in the least, though I did appreciate that the packaging was minimal.
This content is the opinion of the submitting contributor and is not endorsed by EdenFantasys.com