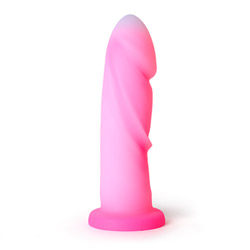 I've Got a Cush On You

Cush was one of the toys I purchased as a warm up toy to get to larger sized ones. The size worked well for me and I love the O2 material, but not quite as much as VixSkin material. I really appreciate that Tantus came out with this colorful line of realistic dildos as they appeal to my aesthetic tastes more than a flesh toned toy does. The only thing that stops this from being perfect for me was the amount of texture. After a short period of time, it started to get a bit painful for me.
Pros:
Realistic material, Fun color options, Harness compatible, Good size for warm up to larger toys
Cons:
Texture may be too much for some
Rating by reviewer:
4
extremely useful review

Cush is made of Tantus' realistic O2 material, but done in a variety fun colors for a less realistic look. Cush is part of the newer colorful O2 line which also includes the O2 Flurry and O2 Revolution. Cush features some texture at the shaft which also isn't in the realistic realm. It's a great option for those that want something that feels like the real thing, but with some added stimulation and a more colorful appearance. Cush comes in pink, purple, and blue. 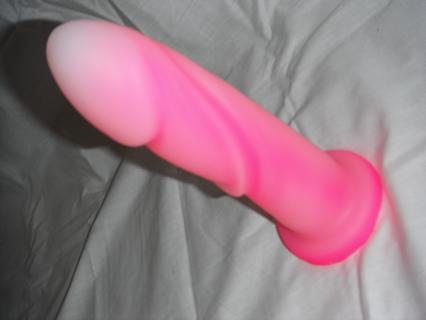 Cush is made of silicone, putting it at a 10 on the safety scale. Silicone is non-porous and can be boiled to disinfect if sharing between partners. 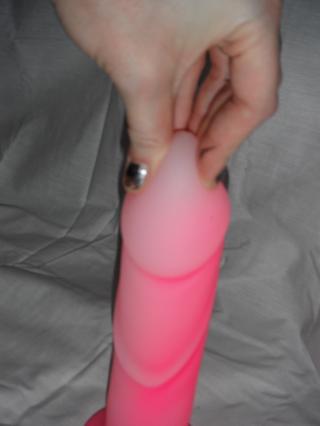 While the inner core is very firm, it is not completely rigid. It can be bent somewhat, but will go back to the original shape when you let go. It does not flop around on its own. To get the bend, you have to put force into it. 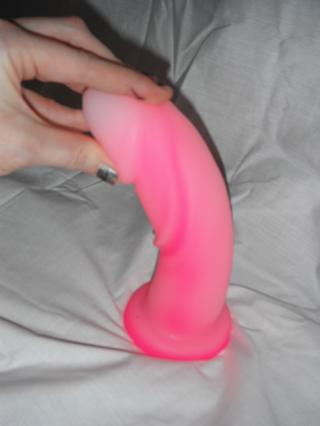 The soft outer layer does have a bit of a sticky feel to it. This is very noticeable at first and seems to go away a little after a few washes, but always stays a little sticky. This means that Cush is a lint, hair, and everything else magnet. Good storage is a necessity and a quick wash down before use is probably not a bad idea.

Texture wise, the Cush has the indent around the head and then from the head down to about the middle of the shaft is what looks like half of an oval for texture. This half oval is raised up and then indented downward to make it more pronounced. It is done in the white, squishy silicone. 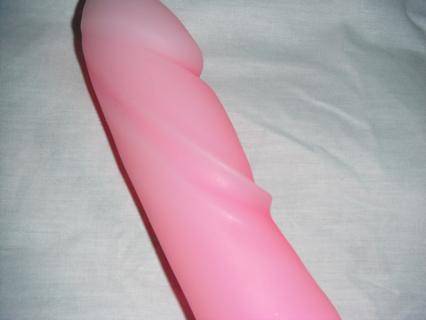 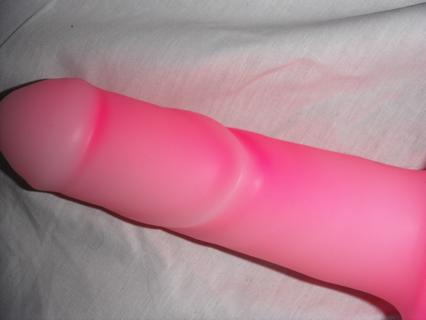 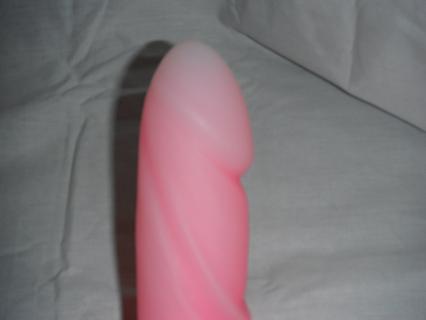 The indent on the head is noticeable during use, but isn't overwhelming in texture. The half oval a stronger texture than you would think considering it is done in the squishy material. While I can push it down with my fingers, it can be felt very much during use. I'm slightly texture sensitive and the texture on Cush would set those sensitivities off most every time I used it. It's not as bad as something with ribbing all up and down it, but it was enough to cause slight discomfort sometimes and pain other times. 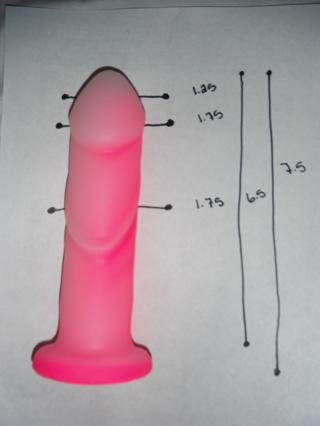 Here you can see it in my hand for size reference: 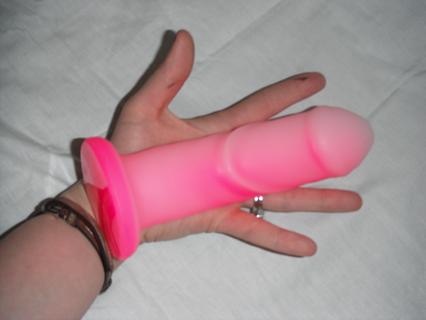 I'm a girl that likes smaller toys. When my husband came to me and said he had a fantasy of me using larger ones, I knew I would need some warm up sizes. Since my max diameter had been 1.5", the 1.75" of Cush seemed like a good stepping stone size. This size works out well for me as a warm up toy for bigger sized dildos. As a stand alone size, the 1.75" seems to either be too big or too small, depending on what I'm in the mood for that day. If I'm in a regular size mood, 1.75" is too much. If I want bigger toys, the 1.75" just doesn't cut it. It does work for what I got it for though, which is to warm up for 2" sized toys. The length of this is good. It's sometimes more than I need, but then I just get a larger handle.

The size works well for me, at least for the intended purposes. It makes a good stepping stone to go from a 1.5" toy to a 2" one. It gives a more full feeling that what I was used to at 1.5" sizes, which felt surprisingly good.

What didn't really work for me was the texture. While it wasn't so textured that I couldn't use it, I was never able to use it for very long before it got uncomfortable. The texture would go from slightly enjoyable to a little uncomfortable to kinda painful in about fifteen minutes tops. Luckily, since I was just using this as a warm up I didn't need to use it for too long anyway. If I had gotten this to use as a stand alone, I would have been really upset at how little of a period of time I can use it before I have to stop.

While this isn't a toy that it shared or used in a harness, I did put it in my harness just to see. It fits in nicely and is easy to wear around. If the Flurry is anything to go on, this one should be great during actual harness use as well.

It's not technically a suction cup base, but it does actually stick to things pretty well. You have to wet it to get this effect, but once it's wet it will grip well and is hard to get back up from whatever you stick it to. It even holds well on a vertical surface.

Only water based lubes should be used with Cush. Silicone lubes can damage silicone toys.

Cush comes in a see through box, so it's not at all discreet. The front says "100% Ultra Premium Platinum Silicone" and "The World's Best Soft Toys For Adults" as well as the Tantus logo. The back has some information about Tantus. The side has a blurb about "what makes Tantus toys the best" and little bullet points. 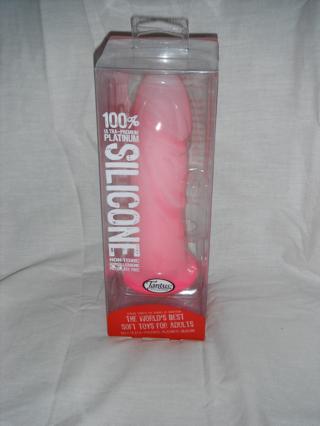 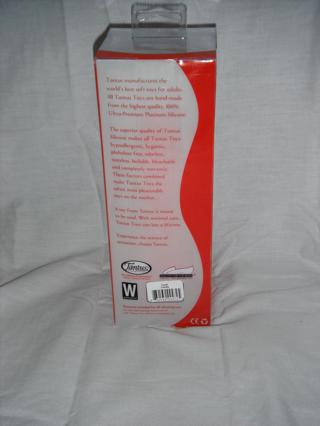 Since it's see through and mentions "toys for adults," this is far from discreet. It doesn't work all that well for storage because the plastic of the box top doesn't go back together well and the box itself starts to lose shape quickly.

There are no instructions included, but none are really needed.

If you're looking to step up from 1.5" sized toys or just know you like 1.75" toys, Cush is a fun toy with great material. The only downside is the texture, but that may be a plus for many. Other than the texture, I really like this toy and would recommend it to anyone that doesn't have the same texture sensitivities as I do.

In case you were curious, I decided to take a picture of Cush next to Flurry so you can see the size difference. I know some people may be looking at both, so I thought a comparison photo might be helpful. The texture on Flurry's double heads is also noticeable, but doesn't seem to bother me. It's 1.5" in diameter as opposed to 1.75". 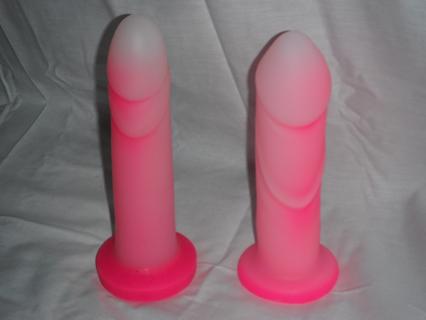 Since I never planned on using this for extended sessions, the fact that I can't use it too long didn't end up being a total deal breaker. I can use it just about as long as I need to in order to move up to the next size. I do wish it wasn't so texture because then maybe I could use it on days I wanted something in between as a stand alone.

While I do think the VixSkin is more realistic, O2 is still pretty close to the real thing. If given the option, I'll go for the VixSkin, but I do like having some of the O2 in my collection as well. Especially with the pretty pink colors!

I'm going with a four on this. The texture stops it from being a full five stars for me, but it still does exactly what I wanted it to do - warm me up for larger toys and have a realistic feel. The look of the Cush is great and what really draws me to the colorful line of O2 toys. It's not perfect, but it's still a solid toy and one I'm happy to have.
This content is the opinion of the submitting contributor and is not endorsed by EdenFantasys.com