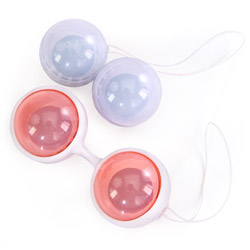 Finally! These sexy beads are mine and I love to use them!

These things are really cool and I expect great results if I continue to use them. It's fun jumping around and feeling the inner balls rolling around inside of you (inside the outer balls of course). I think it's a great system since it allows you to work your way up without having to buy new, heavier weights every time you think you're ready. This us definitely a great choice for kegel exercisers.
Pros:
varying sizes/weights, discrete
Cons:
hard to remember to use every day, no results without continued use
Rating by reviewer:
5
extremely useful review

I've been waiting quite some time to get my hands on vaginal exercise balls, and I finally have! I bought the Luna Pleasure Bead System, and I must say I am glad I made this choice. Lelo is definitely a high-end sex toy manufacturer, but it is well worth the price you pay.

These beads can be used to strengthen your kegel muscles, which is associated with better sex (as well as being suggested for people with poor bladder control).

Other similar devices seem to only have one weight (i.e., they don't have any interchangeable parts). This system comes with a harness and four balls, including two pink balls (28 grams each) and two blue balls (37 grams each). The blue ones are heavier than the pinks ones. The balls are made to fit into a harness which holds two of them. The balls have an outer shell with a smaller ball which rolls around inside of it.

Varying weights are from 28 to 74 grams.

As you can see, this system really allows you to work yourself up to the highest level if your muscles are not already strong. The idea is to insert them for about 30 minutes each day (preferably while walking, running, swimming, etc. so that they're moving around and your vaginal muscles are working to hold them in) and after a few weeks (up to about 12 weeks) you should begin noticing a difference. Note: I suggest using lube to get the balls slick for insertion. The system comes with a sample packet of Lelo's lubricant which is glycerine free and paraben free.

Note: One bead of each color has an attached string loop. This hangs out of the vagina (similar to a tampon string, and as strong, but not as thick [it's not at all annoying and you can't feel it against your labia as much as you might with a tampon]) so you can later pull them out. If using just one ball, you don't use the harness, but you will definitely need to put the one with the string in, not the one without.

The beads do not have any smell, so that is not an issue.

They are made out of ABS/body safe silicone. This is a hard material with a glossy/pearl luster.

This system includes 4 spherical beads and a harness to use 2 at a time. The pink beads weigh 28 grams, while the blue ones weigh 37 grams. The diameter of the beads is 39 mm. The girdle (harness) is measured at 89 x 35 x 16 mm.

I have not used it quite enough to really feel the benefits, but I must say that they are still wonderful. It just feels nice being able to feel things moving around up there, and I know I'm exercising my love muscles so it's all good :p

It is very easy to clean and store these. Just wash with hot, soapy water.

They come with a very nice storage container. The beads have a little thing in which they sit perfectly without rolling around. Underneath you can store the booklet which comes with it and the very nice silky pouch that comes with it. The box itself comes with a lid and is black.

Make sure that if you're trying Luna Beads out with just one bead at a time, you use the bead with the string! The first time I tried this out, I made the mistake of just shoving one up there. Then I realized that I'd have to get it out! I ended up having to really shove my fingers up there (and I'm not the type who you can realistically fist, so it's a tight squeeze!). After a few minutes of standing with one leg resting on the bath tub ledge and my middle finger reaching all the way up there (plus some tremendous squeezing like I was trying to give birth) I was able to get it out.

Don't let this stop you from getting it though. All you have to do is use the beads with the strings (and use the harness if you're using two beads at a time (one with a string that goes through the harness and one without the string that sits securely in the harness) and you will be absolutely fine. Even if you put one up there without a string, you can get it out, but I just suggest not doing that since you really have no reason to want to be bothered with that!
This content is the opinion of the submitting contributor and is not endorsed by EdenFantasys.com