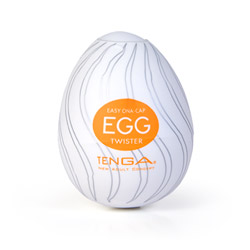 This is the best hand held mastorbator that my husband has tried so far. The egg's inside design was made perfectly for maximum pleasure and the package of lube included made it really convenient. It's also great because there is no clean up needed as it will likely not last past one use.
Pros:
Silicone, plastic egg case, lube package
Cons:
Short life span, gets dirty easily
Rating by reviewer:
4
extremely useful review
Function
The Tenga egg masturbator is made to be a hand held male masturbator. It is convenient and can be taken on the go. It doesn't seem to have a great shelf life making this a little pricey.

Material
This mastorbator is made out of Silicone. It rates a 10 of 10 on the safety scale and is one of the best available product materials. It is also hypo-allergenic, latex free and phthalates free. It is also a great material because it is non porous. I don't really think this toy can be shared since it doesn't get many uses. Typiclly with silicone toys I would recommend a water based lube but this one comes with a small sized packet of lube tucked underneath the egg.

Texture and Design
Since it is made out of silicone it has a jellylike feel to it. The outside looks like a normal hard boiled egg. The inside is a whole different design depending on which you purchased. It is available in 8 different designs: Sparkle, Twinkle, Twister, Spider, Wavy, Clicker, Silky and Stepper. I chose the Twister option. That one is designed to have rows of raised silicone. It's design reminds me of a truck's tracks in the mud and it runs vertically the entire length of the inside of the egg. The whole used to insert the penis is about 3/4" wide but can be stretched to about 6" wide. It is extremely stretchy making it really comfortable and easy to maneuver. The egg is extremely small at 3" in length not stretched and at the middle point maxes out at a diameter of 5" making it easy to pack for traveling.

Features
One of the features of the Tenga egg is that it is disposable. While this is a great feature it is also a slight disappointment as I was hoping to find something my husband would like and be able to reuse. He likes it the most out of a few that we tried previously and unfortunately it wasn't able to be salvaged after one use.

Another feature of this product is that it is designed to be small and fairly discreet making it ideal to take along while traveling. It can be placed in luggage along with your other items and not ever be seen by anyone your traveling with.

Care and Maintenance
This toy was great because we didn't have to clean it. It basically broke during use so it went right in the trash.

Packaging
The packaging is really cool. The mastorbator comes packaged in a hard plastic white egg that resembles an Easter Egg. It also opens the same way as the plastic Easter Egg. The outside contains a plastic shrink wrap that when it arrives should be sealed. The packaging says Easy Beat Egg Twister Tenga written in orange writing and gives a brief description of how to use it.

Similiar Products
The similar products that I included below are based on being an affordable hand mastorbator. They are all made of different materials so be sure you check this.
Experience
So far this is my husband's favorite mastorbator. We've tried a few similar ones but he's only been sadly disappointed. He was a little hesitant at first and tried to play disinterested until I finally opened the package. Once I started using it on him he completely gave in. Now at the time it was around 3 o'clock in the morning and he was sleeping so it was pitch dark. I opened it so quickly I had no idea that it came with lube so of course I got up and hunted around for my bottle. Halfway through the top of the egg gave way and totally broke open. We were still able to use what was left to finish the experience but we were sad to see it go.
Follow-up commentary   I still like it 9 months after original review
A few months after trying the Twister version and having it break we decided to give the Tenga egg another shot. We also tried the Silky version and found that it also had a short life span. The worst part is that my husband really enjoyed both versions so hopefully I can find something else that lasts a little longer.
This content is the opinion of the submitting contributor and is not endorsed by EdenFantasys.com