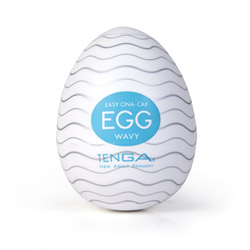 This is a great toy in theory. After reading the reviews, I decided to purchase one. However, I think our egg may have been defective, or maybe it was a user malfunction, but it ended up hurting my husband.
Pros:
Small, discreet, lube included
Cons:
Pain inflicted to my husband, no instructions
Rating by reviewer:
2
useful review

I bought this egg for my husband thinking it would be a great thing to try to get him off in the car. I think that this egg could be used just about anywhere. It comes in a cute little egg that reminds me of a plastic Easter egg. Inside is a silicone egg with a hole in the bottom with a little insert holding the lube. This is very flexible seeing as it is silicone. I think this toy would work for any guy looking to jack off to a new feeling or for couples. I used it to jack off my husband. You can really use this toy anywhere which is great.

The Tenga Egg is made from silicone. It is extremely stretchy. It does leave your hand feeling kind of greasy, and it smells really funky. We had the Wavy Tenga Egg. My husband said that the waves felt really good. It is a plushy, soft egg that is able to easily form to any penis. This can be used by any male. It isn't difficult to use at all. The interior has waves along the sides for added stimulation.

The design of this egg is a little genius, making it an egg was an awesome idea. It easily fits around the penis. It is also very easy to conceal. Being in an Easter egg style container, it can be just thrown in your car or put on the coffee table and no one is going to suspect what it is. It's a pretty small egg so it is really easy to travel with and comes with its own lube which is pushed up inside the egg.

Okay, so here is where we had a few issues. I loved the idea of the egg and how it could be used easily on the road to get my husband off. Well, it was a great IDEA! I attempted to stretch the egg the entire length of the penis, which I have heard can be done. Well this went without a hitch for about 5 mins.... then Huston we had a problem! The Tenga Egg decided to rip but only a tiny bit... it had a tiny tiny hole at the top of the egg. Well with all the friction that I was applying, the head to my husbands penis went through the tiny whole and the egg got stuck to his penis! Not exactly what I had in mind when I purchased the Tenga Egg. We had a hard time removing the egg from his penis... comical... why yes it was. Not so much for my husband though, he said it was extremely painful while trying to remove it. Eventually we did get the egg off of his penis. I was laughing hysterically, and my husband ended up in a bit of pain. So overall, this toy didn't work out for us very well. I don't know if we got a defective egg or what.

Also we had a kind of difficult time to figure out how to use this toy. My husband also said it didn't really feel realistic at all, but it was a nice alternative... before the damage happened.

I don't know a whole lot about how to care for the Tenga Egg due to the damage it incurred during use. I didn't find it necessary to clean and store it when it wouldn't be used again. It did come with its own lube which was nice. It was nicely tucked up into the egg which makes for easy travel. Everything was in one nice tiny package.

The Tenga Egg comes in a discreet egg container with a cute Tenga Egg label on it. Once the label is removed, it looks like a white plastic Easter egg. The package didn't offer any instructions which made it difficult for a first time user. We did figure it out...I mean there is only one hole and it's made for a male...It's not rocket science, but we weren't sure how we were supposed to stretch it or if it was supposed to just sit on the head of the penis.

If you are able to reuse the Tenga Egg, I am sure the plastic egg container would make a great place to store the egg.
Follow-up commentary   I've started to like it more 4 days after original review
After receiving a different Tenga Egg we did notice that the Wavy Tenga Egg that we received that ripped did, in fact, have a defect in the design. I now think that this won't be the case with other Tenga Eggs. Maybe it was just the one that we received... it happens.
This content is the opinion of the submitting contributor and is not endorsed by EdenFantasys.com