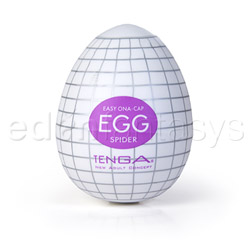 This toy was every bit as fantastic for my man as I'd expected, and fun and easy for me to use on him as well. The Tenga Egg packs big pleasure for such a tiny egg with a tiny price, and is also as discreet as can be for those who need it.
Pros:
It has everything you need: great material, very satisfying for my man.
Cons:
Could have used a moist towelette for cleanup to be a truly complete on-the-go product
Rating by reviewer:
5
extremely useful review
After seeing the Tenga egg hit the market at EF and reading the reviews, I had to order one for my man and give it a shot. I chose the spiderweb pattern based on one of my/his tattoos and it came just as perfectly packaged as I'd heard.

Inside the egg there was a soft, spongy round silicone toy with a short test tube shaped piece of plastic inside holding a rolled up packet of lube. It is not the elongated shape of most masturbation toys but once I played with it a little, I could see that it was super stretchy and would fit my man just fine. The inside has something that looks more like a matrix-esque graph paper pattern than a spiderweb and is quite sticky to the touch at first even though the outside is dry and soft. It had a light odor of something close to machine oil, most likely from the manufacturing process.

When I used it on my man, I put a few drops of the lube on him and put the rest inside the toy, and the squeezed it to distribute the lube. I put it down over the head of his penis and just squished it around a little to see what he thought of the feel of it. He didn't seem impressed at first by the interior texture but really liked the feeling of the silicone material itself. It took a moment to figure out how to make the egg do its job best, but I quickly settled into a traditional method of holding my whole hand around the egg and moving it up and down. I really liked that I could see him through the egg when it was stretched and he really liked how it felt.

It took him a moment or two less than a toy-free hand job to get off and he seemed overall very pleased with the toy. I was able to squeeze the toy lightly when I pulled it off of him, which kept him fairly clean with very little lube and semen left on him. He did have a thought though that to make it a truly perfect all-in-one package, it could have used a wetnap or moist towelette inside the egg with the lube packet.

After he recovered, he said he didn't notice the stickiness of the toy at all with the lube and that at no point did it stick to his skin or did the lube wear off. Since all the packaging is in Japanese, I'm not entirely sure what kind of lube it is, although my guess would be water based. A silicone lube would have reacted poorly with the toy, but it definitely was on the thick side for water based lube.

Although this is marketed and affordable to use as a single use toy, once we had used it once, there were no toys and barely any loss of shape in the toy. I flipped it inside out and washed it thoroughly with soap and water and set it to dry in open air with an absorbent paper towel underneath. Once the inside was dry, I put it back in the egg for storage. I doubt we'll get more than one or two more uses from it at best. Even if we had only gotten the one, I still would've been thrilled with the product. If you are, or are servicing a larger than average man, especially lengthwise, it probably will work only once.

I've seen it mentioned that this toy would work great if turned inside out and used on the clitoris or around a toy in the vagina. I think it is made perfectly for its intended use and see no reason to use it for anything else.

The toy is obviously great for those on the go or needing discretion; but, for the price, I don't know who it wouldn't be perfect for. My man didn't seem so much impressed with the specific pattern we chose, but was still very happy with the material and overall feel of the toy. This was probably because it is a milder grid pattern as opposed to something studded or more strongly grooved. I fully intend on picking up some of the others, as it is one of the most worthwhile toys I've ever encountered.
Follow-up commentary   I still like it 2 months after original review
We actually got to use this 'single-use' toy twice. We've since also purchased the clicker pattern which was also used twice, and he enjoyed the more protruding texture of the clicker pattern more than the spider.
This product was provided at a discounted price in exchange for an unbiased review. This review is in compliance with the FTC guidelines.