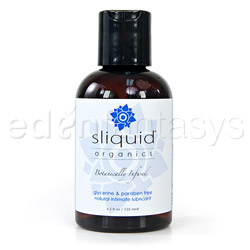 Though the upfront cost might be off-putting for some, it is utterly worth it. Whether or not you have allergies, lead a vegan lifestyle, or just want something natural, this lubricant can provide you with what you need. Bedroom veterans and newbies can both reap the benefits of a solid water-based lube, without the irritants some other products have.
Pros:
- Great for use with all toys
- Minimal allergens and body-friendly
- Feels natural
Cons:
- Absorbs too easily
- Not thick enough for all activities
- Runs out fast
Rating by reviewer:
5
extremely useful review

This water-based lube is one model of Sliquid's organic line. This organics line is a forumalic improvement over their standard "naturals", taking their promise of body-safe ingredients to the next level. As such, it is great for people no matter what sorts of sensitives they have, including vegans and those that normally have allergic reactions to the materials found in other sexual lubricants.

I think this lube would work splendid for someone just entering the world of sex. Skip playing trial-and-error, the yeast infections and unpleasantness that could be waiting if you try and find out the hard way if you'll have a reaction to something. The few extra dollars you pay for this product up front is honestly worth it when you consider that, not to mention that a good lube is utterly essential for great sex. Of course, even those of us who have been around the block still have a lot of gain from this lube. A good body-safe lubricant will always have a home on an sexy-savvy shelf.

On top of everything else, it is paraben- and glycerin-free, and safe for use with condoms, silicone toys and glass toys. The only place you won't want to use this is in water, since it will easily wash off.

For a purely water-based lube, I was a bit surprised by its thickness. Make no mistake, when I say this I do not mean it is a thick lube, just thicker than I expected. It sticks more than Pink, but not as much as Sliquid Sassy. It runs easily, after a few seconds, particularly when coupled with glass. But that shouldn't be much of an issue, given the fact that the prime use for this toy involves an all-over coating on one's toys or fingers for vaginal insertion, and that causes even the thickest silicone to spread around. That being said, it does not drip from where you put it on its own.

It is easy to pour, although anything more than a few drops can be hard to coax out of the bottle at one time. That is a flaw of the packing, and not of the lube itself.

Like over Sliquid lubes I have tried, it has a slightly greasy quality, though this is not off-putting. The texture reminds me of something between water and oil, which makes sense given what the product is used for. It is definitely slick, with not a hint of creaminess.

Other than this, it has no other qualities. It does not get sticky or tacky, as it absorbs into the skin or evaporates before this can happen. However, if you have had this product for more than a few years and have a habit of leaving the cap popped open, this might change the consistency of the product.

In regards to taste and aroma, this product has a slight hint of each. The smell is fresh, and slightly herbal. Once again, this isn't surprising given what is on the ingredients list. I would compare it to just a tiny pinch of rosemary or lemongrass. The scent is not overpowering or unpleasant, and shouldn't keep you from focusing on the act in the moment. I absolutely hate it when products that are not meant to be used as aromatherapy have distracting scents. If I wanted to be reminded of the smell of herbs and linen I would just burn a candle.

Neither the taste more the smell lingers once the used has been dried up. You don't even need to wash it off, since it just wears by itself.

Due to the fact this product is water-based and can be used so many different ways, I'm going to break down how it performed during each act.

Handjobs (on a male-bodied partner): I would not recommend this product, or many other water-based products, for petting. They simply do not last long enough, and they absorb too easily. Though you can re-activate the ingredients with water I still found myself constantly squeezing more out for the bottle. For the price of this product, a hybrid silicone-water, silicone, or oil lube works much better unless you have a sensitivity.

Unless you bathe yourself in it, you probably won't have anything to clean up after the fact. If you do, I would simply try to rub it into the skin and treat it like a moisturizer, as that generally gets rid of anything I have left over. It does not hold up against water.

Like other Sliquid products, this comes in a little 4.2 ounce, 5 inch tall bottle. In this case, the packing is a dark brown reused plastic that is also recyclable. The outside is wrapped with a blue and white label, stating "Sliquid Organics" with "botanically infused" written below it, followed by "glycerin and paraben free", and the size of the product. The reverse gives a complete list of the vegan ingredients, with a star to mark which ones are organic.

It also gives a bullet point list of all of it's features, including:
- Being natural and organic
- Being water-based and water-soluble
- Being hypoallergenic
- Being glycerin-, paraben- and petroleum-free
- Being latex, rubber, plastic [and silicone] friendly
- Being 100% vegan and free of animal testing
- Being made in the USA, forumlated by women, for women

Now, when it says that it is hypoallergenic, I would like to clear something up. Hypoallergic does not make it allergen-free, it simply means it is not likely to cause an allergic reaction. Think of it as being like a "hypoallergic" dog, like a goldendoodle. That doesn't make the dog allergen-free, but it is less likely to cause an allergic reaction compared to other dogs. Double-check the ingredients list before purchase just to make sure nothing could cause you irritation.

There is also a little statement on the other side, next to the barcode, along with a phone number, the website, a warning against use if the safety seal is broken, and a sentence asking you to please recycle after use.

The package is suitable for travel, as long as you aren't planning on taking it on a US airplane. I would either get a travel tube to transfer some of the product in for that instance, or get a few sample sizes to tide you over. It is also discreet. While I wouldn't personally keep this out on my nightstand, those that are a bit more open about their sexuality should have no qualms. You could also remove the label, or cover it with duct tape or a sharpie.

One thing I discovered is that the label holds up really well against water. A lot of the time plastic bottles, like water bottles, have this really flimsy paper glued on as a label, espeically when the product is meant to be recycled. This one is not. It really sticks on, and resists tearing, almost as though it were laminated. This makes the bottle good for keeping in the shower, but I wouldn't do that with this particular lube since it can't hold up against a soak. If you have one of the Sliquid Silver products I would advise you try to keep the tube in the shower if you frequently use it there, since the labeling will not melt off.

My two complaints about the packaging are minor.
One: It is hard to tell by looking how much of the product is left, and once the bottle starts to get low, it is hard to pump out with one hand. The dark packaging does not help with this.
Two: it does not say when it expires. Seriously, you think a product that is meant for the most sensitive areas on a person's body would have an expiration date. I would throw away this lube after 2 years if you have not used it all by then.

The reason why I can recommend this product so highly to beginners is because this was the second lube I ever purchased, after a flavored lube also by Sliquid. As such, it was my go-to lube, and despite gathering quite the collection over the last few months it remains at the top of my drawer.

I have had a problem with vaginal dryness over the last couple of weeks, and this has been a godsend. Where I might have been able to go "natural" before, I have had to apply lubricant. Instead of making me feel awkward about the fact I needed something extra, I always feel comfortable and normal when I introduce this during my partner's and I's sexy time, and most of time I even forget I'm using it.

JO H2O lubricant
$11.89
This content is the opinion of the submitting contributor and is not endorsed by EdenFantasys.com