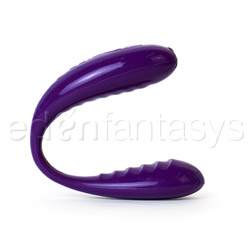 The We-Vibe 3 is billed almost exclusively as a couple's vibrator, an aspect in which it totally failed, for me. However, the shape and feel, as well as the versatility of the design more than make up for this for solo use. If only the 3 had more power in both ends, and a clitoral arm that didn't over shoot my clitoris. Also, I wish the 3 was 'poseable' and could keep its L-shape rather than always trying to curve back to its C-shape.
Pros:
Waterproof
Silicone
Good power and functions
Great for solo play
Cons:
Uncomfortable
Only 2 steady functions
Clitoral arm is too long
Finicky remote
Rating by reviewer:
2
extremely useful review

Women who find they are small or don't enjoy girthy penetration will not enjoy this toy during sex. Those that do, however, the 3 provides a very full feeling, especially since you can distinctly feel the two objects at the same time, during sex. Power queens will find that the We-Vibe 3 is rather underwhelming, despite the claims that the 3 has 100% more power than the We-Vibe 2.

The We-Vibe 3 is totally waterproof, something else it has on the 2. It could definitely be used to spice up an encounter in the hot tub, pool or shower. Additionally, the 3 is whisper-quiet. I own other We-Vibe products and I would say it's the quietest! Unfortunately, it's also the least travel-friendly, since the packaging and the charger dock are so oddly shaped.

Since both the bulbs vibrate, you could feasibly use the ends to tease the nipples, scrotum, balls, thighs and buttocks. Holding as if you were pinching with it (between the thumb and forefinger), or trailing the toy over sensitive areas could be fun for foreplay.

The We-Vibe 3 is made of 100% silicone. It has a plush, slightly squishy feeling to it your hand, with a very high drag factor. It was scentless and tasteless out of the box. The color is a very saturated purple, with a high shine. In fact, it's the same kind of silicone as the We-Vibe Touch, which I also own.

The 3 has two arms, one designed for penetration, the other designed to lay across the vulva and clitoris. The two arms are connected by a highly flexible, narrow region that is quite firm. I can't tell what the connective region is made of, but it isn't poseable -- it tries to curve back to its original C-shape. When you pick it up, the entire thing kind of bounces, so at least it's not stiff.

The two arms have different textures on the internal side. I find both to be quite effective in providing extra stimulation. 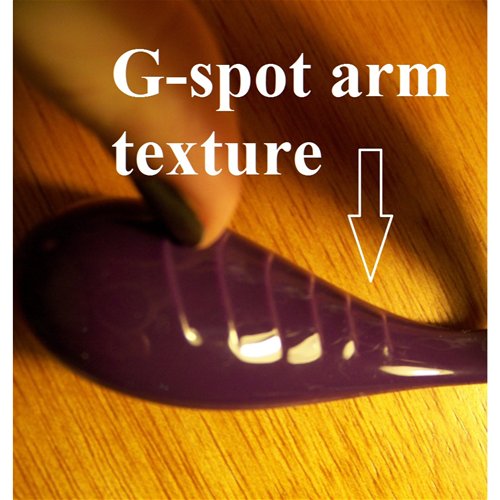 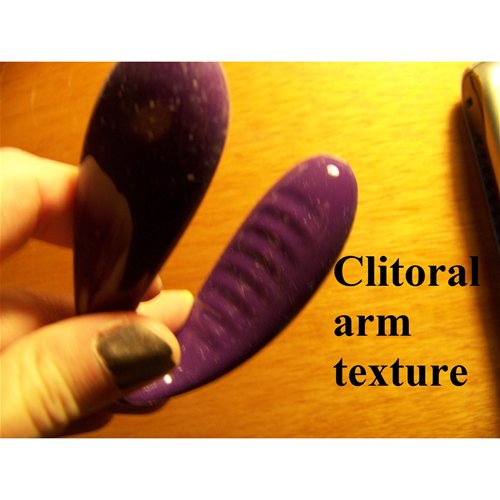 The 3's material is quite lint-happy, which you can see in the pictures.

I personally find this kind of high-drag silicone to be both a blessing and a curse -- it feels so luxe and friendly to the touch but without a significant amount of lube, it can really be a pain to your sensitive bits. Also, it can drag on any pubic hair, which is painful and mood-ruining!

The We-Vibe is small, easily fitting in the palm of my hand. 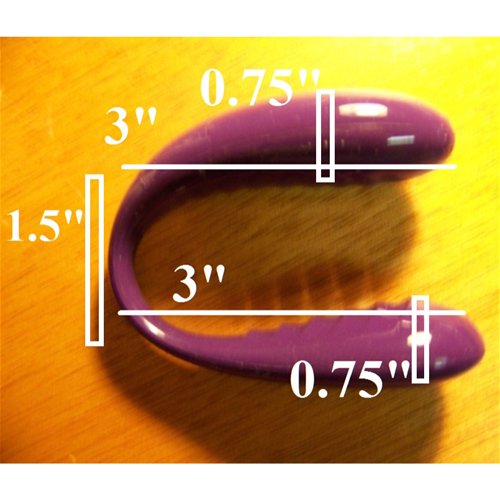 There are 5 flaws with the 3:
1. Uncomfortable during intercourse
2. Huge clitoral arm
3. Location of the clitoral arm's motor
4. Get ready for queef city.
5. *Possible problems with condoms

Even though the arms have the same widest point dimensions, you can see that the G-spot arm narrows much more quickly than the clitoral arm, making it feel smaller. Unfortunately, it's not slim enough -- combined with penetration from my partner, it was too much for me! The feeling of two objects, especially since the We-Vibe 3 is firm, was uncomfortable. The fit was so tight that he actually could not move and felt that the 3's hard body was hurting him.

Since it was too painful to continue with genital intercourse, we didn't go all the way for science -- however, he wore a condom while we were trying and he noted definite feelings of increased friction on the condom itself. He also noticed a pulling sensation, like the 3 was trying to make the condom ride up. Adding lube helped with friction, but also made everything slide around and out of place -- condom, We-Vibe 3 and penis. It was like a circus.

The clitoral arm is huge. Most women have their clitoris located between 0.5" and 1.5" from their vaginal entrances; the longest distance is 2". Why then, should this toy have a clitoral arm that is 3" in length? And why should its motor be located in the very tip, where it will totally overshoot the sensitive clitoral head? These are some serious flaws that prevented me from achieving orgasm with the 3. Also, that huge excess presses into the pubic hair, which yanks. Not cool, We-Vibe! 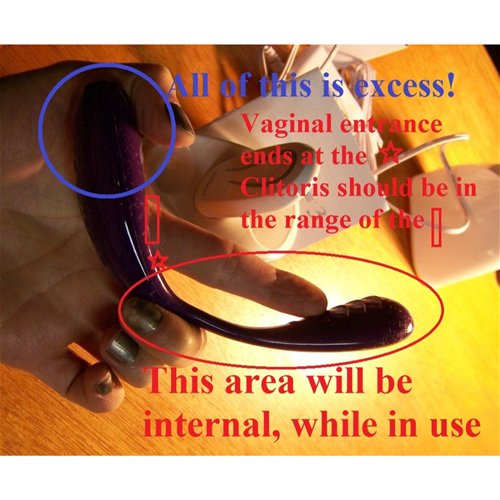 Using the 3 solo yielded better results. Certainly the ergonomic shape and texture is quite nice. However, another problem I encountered was a pretty laughable one -- get ready for queefing a-plenty. You can laugh it off when it just happens once or twice, but since the toy was actually causing it by holding my entrance open...well! The feeling was highly distracting, not just the noise.

To turn on the 3, press the almost hidden bump on the clitoral arm's nose. 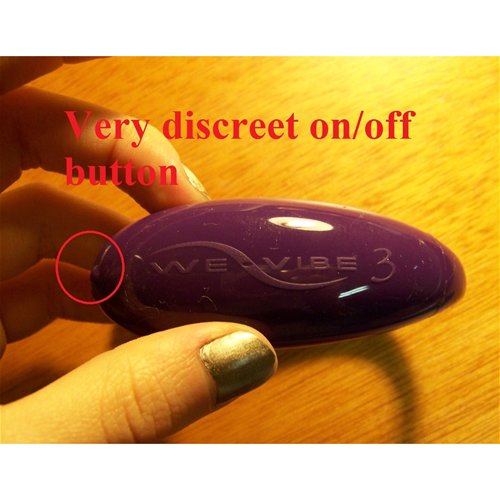 This is the only button on the entire toy. Vibrations occur in both arms at the same time and are not separately controllable. The We-Vibe 3 has decent power, but you'll notice it only one function, the high steady vibration setting. This high setting is pretty fantastic, as it's rumbly yet powerful.

I found it odd that the 3 had more patterns than steady vibes, and that there were no in-between functions for the steady -- the jump from low to high disappointed me. The manual recommends a 24-hour initial charge, which concerned me at first -- however, I noticed that the 3 retains battery life well and in my use of the toy, doesn't need 24 hours every time.

The vibrations, as I discussed in the above section, are located in the tips of the arms. This is fine for the G-spot arm, not so great for the clitoral arm. You can also control the We-Vibe 3 with its remote, which I suppose would only be necessary if you're using the clitoral arm for penetration. I find the remote finicky. Clicking the button doesn't always lead to a function change, possibly due to its terrible range. 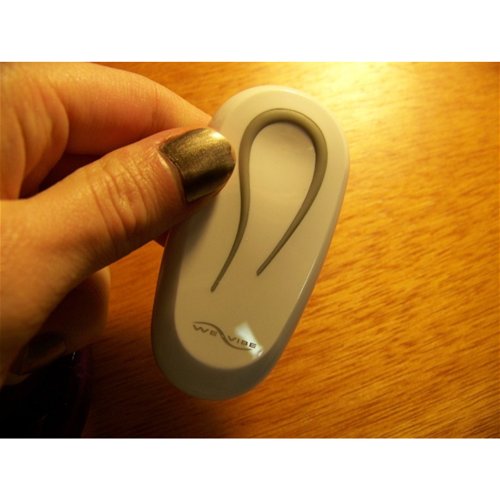 Luckily, this toy is super quiet -- it never gets over 2 bees, which I love. This is the quietest We-Vibe toy I own, with the Salsa being the loudest, the Touch in the middle, then the 3.

One of the features that We-Vibe improved from the 2 to the 3 was to make the entire toy water-proof. I love this! It truly is totally waterproof, with absolutely no hidden ridges or any exposed buttons. The only button is located totally underneath the toy's skin of silicone.

As a result, clean up can be super easy -- I use warm soap and water, but the 3 could easily be soaked in a 10% bleach solution. Do not run the 3 through the dishwasher or boil it, however, as this will harm its electronic components.

As the 3 is made of 100%, quality silicone, premium silicone lubes may be compatible with it (always patch test first if you're willing to take the chance). Water-based and oil-based lubes are compatible with the 3, just keep in mind that oil will degrade condoms. For the record, the manual recommends only water-based lubes and soap and water clean up.

I keep the 3 with its original packaging, but We-Vibe took a strange turn with the 3's box. It's a wide cylinder that will not fit anywhere very well. It doesn't even seem to be necessary as there is plenty of empty space for the contents of the box to rattle around. Additionally, there is no travel bag for the 3, just its charging dock, which isn't terribly secure. 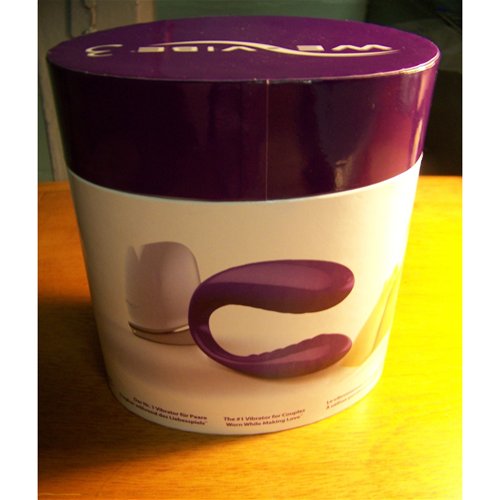 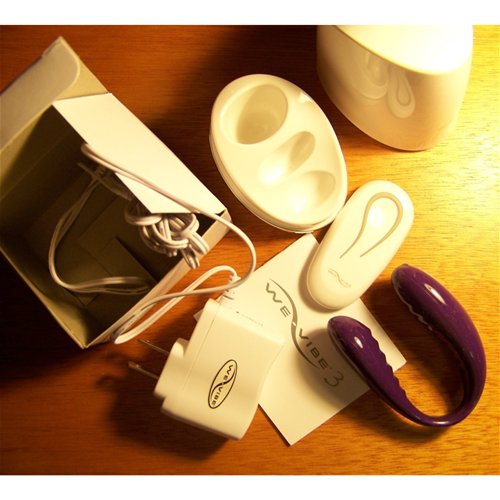 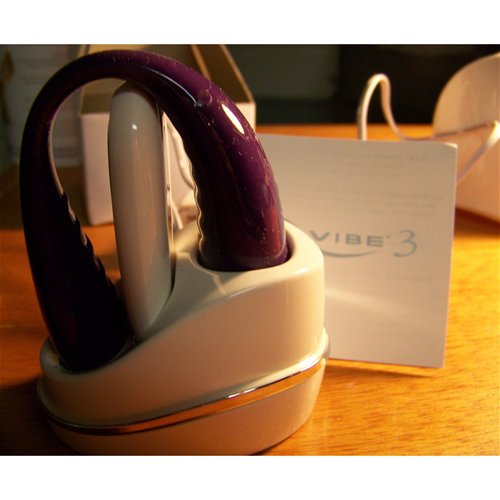 Follow-up commentary   I don't like it anymore 14 days after original review
As much as I like my other We-Vibe products, my good feelings don't extend to the 3. I can't imagine be able to use it effectively or pleasurably for its intended purpose: penetrative sex. The problems with this toy, for me, are insurmountable as I described them above. They didn't get better with time or more attempts. I can see myself using it now and again for solo use, but it has a hefty price tag for just this function and not its main function. I'm pretty disappointed.
This content is the opinion of the submitting contributor and is not endorsed by EdenFantasys.com