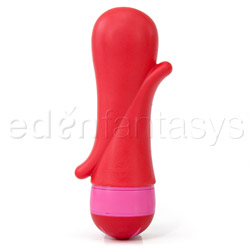 Did not seduce my heart.

The Twisted Hearts' shape is just odd. The flares make it next to impossible to use for penetration. The toy itself is very stiff, except for the tip and the nubs which are squishy and almost sticky. It collects dirt very easily. The design itself it interesting to the eye, but just painful to the body! It's waterproof, but that hardly makes up for the fact that it doesn't work for penetration at all. Maybe a more advanced user could make something of it, but I just could not.

What does that leave it? I tried to use it as a clitoral vibrator, but the vibrators were too weak and too general. The broad head means there's no focus at all and if that works for you, you may want to look into the Twisted Hearts, but it did not work for me. The vibrations are controlled by a twisting control which means there's no pause between settings, which is nice, but it has a habit of sticking, which is not. After only a handful of uses, the dial stuck so badly that I twisted it just a little too hard and it broke.

Overall, I'm just disappointed with this product and happy I got it for free. It failed to impress me in any way and I was not sad to throw it away when it broke. It was uncomfortable, sticky, and hard to use. It broke very soon after I received it. I would not recommend it to anyone who was not also getting it free of charge.
This content is the opinion of the submitting contributor and is not endorsed by EdenFantasys.com