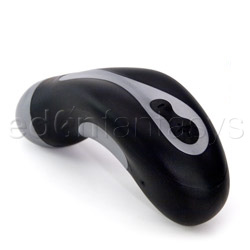 Doesn't quite hit the spot...

The LAYAspot wound up being a "back of the sex toy drawer" toy for me. The sharp curve of the vibrator's body was uncomfortable, and I got sick of having to replace the batteries every time I used it. If it had a couple more vrooms I think it could be fun to play with through blankets/jeans or some sort of padding, but it isn't quite powerful enough for that kind of indirect stimulation.
Pros:
Black! (Black vibes are the sexiest vibes...)
Waterproof/Easy-to-Clean
Cons:
Battery hog!
The pronounced curve of the vibe may not be comfortable for everyone.
Rating by reviewer:
2
useful review
The LAYAspot intrigued at first... I'm a big fan of "lay on top" stimulation, where you press your body into a vibe and do a lot of the work with your hips rather than your hands, so a clit vibe that seemed to be designed to fit around the pubic mound for potential hands-free fun seemed like it could be a dream come true. Unfortunately, for several reasons, the LAYAspot just did not deliver for me.

The second issue was less critical than the first, but the LAYAspot runs on batteries and the batteries never lasted more than one session. Despite the more reasonable price of the LAYAspot as compared to some of the other vibrators of this type, if you aren't using rechargeable batteries in this, your battery costs might lead to you to wish you'd opted for a more expensive brand. On the battery note, please remember to remove your batteries when storing this baby (this is true for most alkaline battery vibes). If you don't remove the batteries for storage, you might pop the toy open to change the batteries at some point only to find that your batteries have corroded and left white residue all over the inside of your vibrator, which can be difficult to get cleaned up.

Aside from these two issues, there were a few things about the LAYAspot that I liked:

(1) It comes in a sexy black and silver body. I'm not a big fan of the pink/purple vibrators, and having a sex toy be black definitely increases the likelihood of me buying it
(2) It doesn't scream "sex toy" to the uninformed, so I could imagine tucking it into a suitcase with very few worries.
(3) The LAYAspot comes in an easy-to-clean, waterproof casing (you can just suds it up with soap & water for cleaning). It is made of elastomer, which is non-porous and has little-to-no discernible scent. Unlike silicone toys, you can also use silicone lube with this baby if you like a little more "slip."
(4) It is fairly quiet as far as vibrators go (2 buzzy bees). You aren't going to be able to stick it down your pants under a conference table, but for at-home use you are golden unless there's someone in the room with you.

As for my recommendations for usage, I would say that if the angle of the vibrators curve looks comfortable to you, you could go ahead and give the LAYAspot a try (keeping in mind that this is a hard vibe with no flex). I can see this potentially being a good intro vibrator for someone who is venturing beyond the "under $30" toys, but who isn't ready to drop $100 or more on a toy. (My big piece of advice, though, would be to invest in rechargeable batteries!) I do think that this toy is more suited for people who are newer to toys or who prefer milder stimulation, because the intensity level only makes it up to about 2-3 vrooms at max, and the LAYAspot is limited as to exactly how much surface area of your body it can stimulate at once.

In conclusion, the LAYAspot didn't work for me, but does have redeeming features that might make it worthwhile for others to look into.
This content is the opinion of the submitting contributor and is not endorsed by EdenFantasys.com

My LAYAspot tags
About author