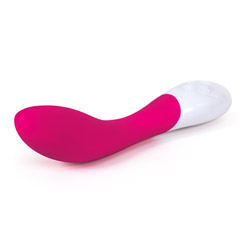 It will rock your world

The material is top notch. The main vibrating area is made of high grade silicone. This silicone is very silky smooth and soft, great stuff. The "handle" is of a hard plastic. The four control buttons are concave. The markings on the buttons are hard to see but do light up when the toy is on. The charging port at the bottom has a good tight-fitting silicone-type cover on it. Overall, this product is made of high quality, luxury materials. There is a slight new-toy smell out of the box, but it will go away and is no big deal. The silicone takes to water based lubes well. The product will need to be cleaned well after each use, which is really easy. There is one spot that is a bit of an issue: where the soft silicone and the hard plastic come together, there is a seam where junk can get in. You just need to watch it and make sure you keep it clean.

The design is very ergonomic and usable. Like I said earlier, I do not use it for the G-spot, so I cannot speak much to that. But it fits in my hand nicely. To me, for internal use, it is a bit on the large size (the girth), but I am a bit of a beginner with toys. This is an at-home toy; you would have to be ballsy to use it out in public, due to its size and the sound. The noise level is pretty quiet for the amount of vibration it produces. This is nice. The buzzing bees can easily become a distraction when using a vibrator.

This toy has the ability to be used by a range of users, from beginners, on up. The size for internal use would be for more advanced users. Its use for external stimulation is beginner-level. This allows for long-term use of the toy without becoming bored. The tip being as large as it is (although it is a disadvantage for internal use for me) is what makes the external use so awesome. This makes it much easier to find the right spot and not have to strain to hold your hand and arm in a specific angle to get off. This makes the whole thing much more enjoyable.

The buttons are easy to get to when in use, and easy to activate. To get it going all you have to do is press down on the ( + ) button. The buttons are concave. This is nice so that you do not change the setting by accident when using it, or accidentally turn it on when looking for something in your nightstand. I would say that this would be safe to travel with, if you wrapped it in something soft like a towel. So the buttons are good. That being said, they are not well-labeled. They do light up when the toy is on, though.

The battery does have good life to it; however, there is not much warning as to when it will go out. Basically, what has happened about 3-4 times, is it dies mid-fun-time. I guess if you average that out over 6 months and consider how much I've used it, it’s not too bad. But it's still really frustrating when it happens.

This is a very simple toy to take care of, and it will last a long time if you treat it with a little love. The silicone used to make it does need to be cleaned with a very gentle soap after each use. I just use my facial wash, and that works fine. The facial wash is not antibacterial, and has no hard cleaners or anything like that. I always store it separate from my other toys. It comes with its own little black pouch that I store it in. So far I've had no issues, and it feels just as good when it was brand new.
This content is the opinion of the submitting contributor and is not endorsed by EdenFantasys.com